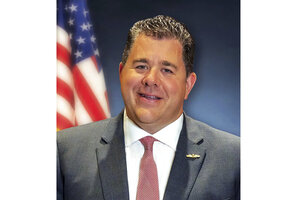 NEW YORK (AP) — Republican candidates for the U.S. House of Representatives notched several wins in New York City’s suburbs, seizing a seat in an area once considered safely Democratic, defending others and appearing on the verge of picking up additional wins in districts the party hasn’t won in years.

The strong showing by Republicans on Long Island came after the city’s suburbs emerged as an unlikely battleground for control of the House. Several closely watched contests remained too early to call Wednesday morning, including the re-election race of U.S. Rep. Sean Patrick Maloney.

By early Wednesday, Republicans had won at least seven seats in Congress from New York, just one less than their current representation in the state’s delegation. They were leading or within a percentage point of the lead in five more races.

Republicans had an unexpectedly strong showing in local elections on Long Island last year that emboldened candidates to reach for possible upsets in two congressional districts now represented by Democrats.

This was Santos’ second run for Congress. Two years ago, he lost by a sizeable margin to U.S. Tom Suozzi, a Democrat who gave up a chance at re-election in an unsuccessful run for governor.

In the other, Democrat Laura Gillen, an attorney and one-term supervisor of the town of Hempstead, was in a tight race with Republican Anthony D’Esposito, a member of Hempstead’s town council and a former New York Police Department detective.

Elsewhere on Long Island, Republican U.S. Rep. Andrew Garbarino defeated Democrat Jackie Gordon in a race on Long Island’s South Shore. His victory was a repeat of a win over Gordon in a district with different borders two years ago.

And Republican Nicholas LaLota defeated Democrat Bridget Fleming in a reworked version of the congressional district now represented by U.S. Rep. Lee Zeldin, who decided not to seek reelection so he could be the GOP candidate for governor.

One of the nation’s bluest states, New York became an unexpected opportunity for Republicans due to voter dissatisfaction and a more favorable political map.

Maloney, who as chair of the Democratic Congressional Campaign Committee was supposed to be leading his party’s attempt to hold on to the House, was in a fight for survival in his Hudson Valley district against Republican state Assemblyman Mike Lawler, who ran a spirited campaign focusing on the high cost of gasoline and other pocketbook issues.

Maloney, who was the first openly gay New Yorker elected to Congress, had a track record of winning in a Republican-leaning district, but the redistricting plan put him in a reconfigured territory where fewer voters know him.

National Republican groups, sensing an opportunity, spent millions on advertisements supporting Lawler, a former executive director of the state Republican party who worked in local government before his election to the Assembly in 2020.

Courts threw those maps out, however, citing procedural errors and overt partisanship. New maps of the state’s 26 congressional districts were then drawn by a court appointee, who prioritized creating as many competitive districts as possible.

That let Republicans run in more favorable districts, where they relentlessly attacked Democrats over inflation and fear of crime.

Democratic candidates stressed support for abortion rights in the wake of the Supreme Court’s decision to overturn Roe v. Wade. Some cast themselves as champions of democracy, running against Republicans who didn’t accept the results of the 2020 presidential election.

The lone Republican representative in New York City, Nicole Malliotakis, won her rematch with Democrat Max Rose in a district consisting of Staten Island and a slice of Brooklyn. Rose represented Staten Island in Congress until Malliotakis ousted him in 2020.

In the Rochester area, U.S. Rep. Joe Morelle, a Democrat, defeated Republican challenger La’Ron Singletary. Singletary was ousted as Rochester’s police chief in 2020 for his handling of the death of a Daniel Prude, a Black man who suffocated as he was being held down on the street by officers. He was taken off life support a week later.

In the Hudson Valley, freshly minted U.S. Rep. Pat Ryan, a Democrat, is trying to replicate his surprise win in an August special election.

Ryan boosted Democrats’ spirits after winning a race to finish out the term of former U.S. Rep. Antonio Delgado, who had resigned to become New York’s lieutenant governor.

Ryan campaigned hard on abortion rights and national Democrats hoped his win could provide a roadmap for more congressional victories in November.

He then ran for a full term in a different district against Republican Colin Schmitt, a second-term state Assemblyman who campaigned on economic issues and his service as a sergeant in the Army National Guard.

The race appeared exceedingly close early Wednesday morning, but Schmitt nonetheless conceded, saying he hoped Ryan “will do great things for our Hudson Valley families.” The Associated Press has not declared a winner in the race.

The Republican Ryan defeated in the special election, Dutchess County Executive Marc Molinaro, is now running a close race against Democrat Josh Riley in a sprawling new district that runs from the Massachusetts border all the way to Ithaca — the small city in the Finger Lakes region that is home to Cornell University.

One closely watched race in upstate New York is in the Syracuse area, where Republican Rep. John Katko is leaving after four terms. That race pits Republican Brandon Williams against Democrat Francis Conole.

Williams, a first-time candidate living outside the district, is a U.S. Navy veteran and tech entrepreneur who moved to the region full time several years ago. Conole is a U.S. Naval Academy graduate and current U.S. Naval Reserve captain. The Syracuse resident has never held elective office.