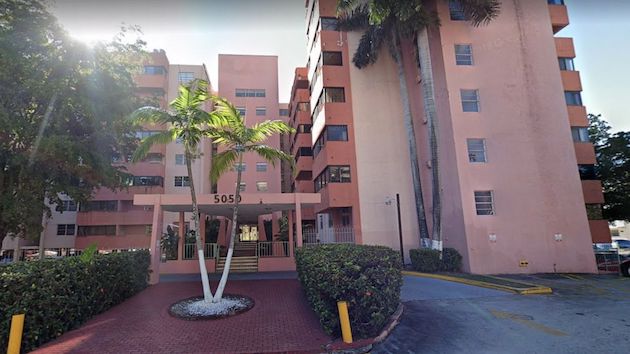 (MIAMI) — Residents of an eight-story condominium in Miami were given hours to evacuate after city inspectors deemed the building “unsafe,” the latest residential structure in the area cleared out since the deadly collapse of a tower in nearby Surfside in June.

An emergency evacuation order for the 137-unit structure, which according to city records was built in 1973, was taped to the front glass door of the building in Miami’s Flagami neighborhood Sunday night, giving residents just hours to pack up and get out.

“This building or structure is, in the opinion of the building official, unsafe,” read the notice posted on the building, at 5050 Northwest Seventh Street, just east of the city’s Little Havana district.

The building is about 16 miles from Champlain Towers South, the 12-story oceanfront condominium that partially collapsed before dawn on June 24, killing 98 people. What remained of that building was demolished, and an investigation is underway into what caused the disaster.

The building on on Northwest Seventh Street was put on notice on July 7 after city inspectors found several violations, including not obtaining a 40-year recertification, according to the Miami Herald.

City building officials met on July 26 with residents “who were concerned about the condition of the building,” an official told the newspaper. A day after the meeting, a city inspector found structural problems in the building’s elevated garage, prompting it to be closed, and informed the property manager about damaged columns on the first floor that “required emergency shoring.”

The city said it never received requests for permits or a plan to fix the problems, but city inspectors found emergency repairs were being done on the structure’s degrading first-floor columns without a permit, officials told the Herald.

During a meeting on Monday with the building’s condo association and engineer, city inspectors “found the columns to be structurally insufficient” and ordered the building to be vacated, the Herald reported.

Several buildings, including a 10-story residential tower in North Miami Beach, were ordered to be evacuated by the city after inspections deemed them unsafe.