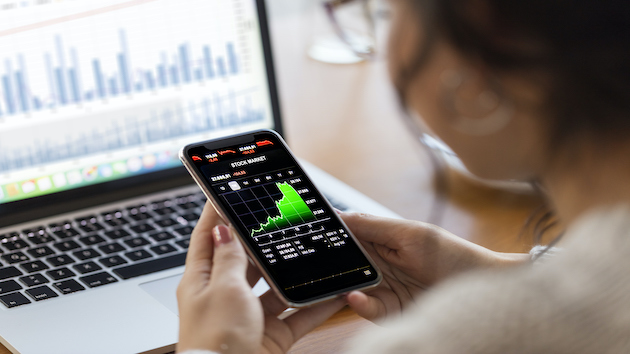 Robinhood co-founders Vlad Tenev (the current chief executive officer) and Baiju Bhatt (the chief creative officer) rang the Nasdaq’s opening bell in Times Square on Thursday morning, surrounded by colleagues and family members. Tenev carried his young daughter on his hip as his company made its initial public offering.

Trading opened to the public at $38 per share, giving it a valuation of some $32 billion. By mid-day the stock fell slightly, trading at around $35 per share.

Robinhood exploded in popularity amid the COVID-19 pandemic as swaths of retail investors turned to its commission-free trading services. It became embroiled in controversy amid the GameStop short-squeeze, when an army of retail investors attempted to take on Wall Street firms that were betting against the video game retailer.

As individual investors pushed the price of GameStop shares up, Robinhood and other trading platforms abruptly halted trading of the stock — leading to allegations they were doing so at the urging of hedge funds and short sellers. The company has denied this, saying the temporary halt was due to clearinghouse-mandated deposit requirements that skyrocketed amid the volatility.

Still, Robinhood’s Tenev was called to testify before lawmakers and the fallout of the GameStop saga left Wall Street reeling for months.

Robinhood has repeatedly said its mission is to “democratize finance for all.” The firm on Thursday celebrated what it saw as bringing its Main Street clientele to Wall Street via its Nasdaq listing. Some 50% of Robinhood users are first-time investors.

“The U.S. stock market is one of the world’s greatest sources of wealth creation. But for generations, it was out of reach for most people,” Tenev and Bhatt said in a joint statement Thursday celebrating the IPO. “Robinhood changed that — we’ve built investing products for everyday people, to put them in control of their financial futures.”

“Our listing day is a celebration of our customers — Generation Robinhood,” the statement added. “Through Robinhood, millions of everyday people have started investing in the stock market for the first time.”

Tenev and Bhatt said these new everyday investors are “making their voices heard through the markets, transforming our financial system in the process.”