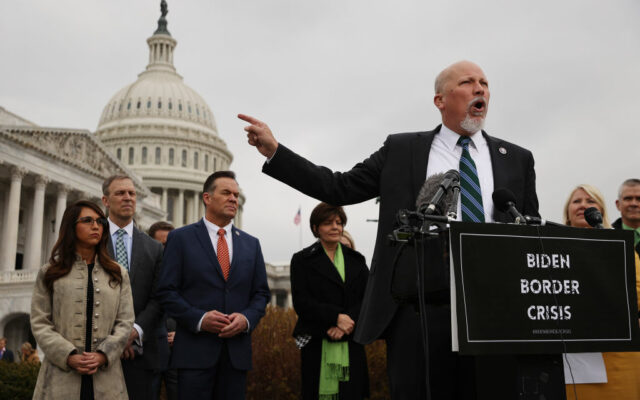 WASHINGTON, DC - MARCH 17: Rep. Chip Roy (R-TX) speaks during a news conference with members of the House Freedom Caucus about immigration on the U.S.-Mexico border outside the U.S. Capitol on March 17, 2021 in Washington, DC. Accusing the Biden Administration of partnering with with drug cartels, members of the conservative caucus listed numerous crimes along the border, including cattle rustling. (Photo by Chip Somodevilla/Getty Images)

Congressman Chip Roy was asked by KTSA’s Jack Riccardi Wednesday on his thoughts regarding Chaney and the ongoing issues she has with former president Donald Trump.

“Liz forfeited her right to be the conference chair when she continued to make an issue out of going after the former president and, frankly, she’s out of step with the Republican conference on this front and, as a leader of this conference, you have an obligation to represent the conference,” the Republican told KTSA.  “She made fights where they didn’t need to exist.  That’s a strategic mistake.”

Roy said he wants to party to deal with the issue regarding the former president and how it collectively wishes to move forward.  Once that it done, then it should talk about who should be in the position to represent the conference.

“And I have a feeling right now there’s an effort to coalesce behind an individual or individuals who may not reflect the conservative values.”

Roy confirmed that, saying, “[Stefanik] voted against funding the [border] wall, she actually voted to condemn President Trump for the Affordable Care Act litigation strategy last year.  These are all things that I think indicate someone who is not in step with the general views of the Republican conference.”

When asked, the Hays County Republican said he had a few names in mind for people he would like to be considered for the role, but those people have not publicly expressed interest in it yet.