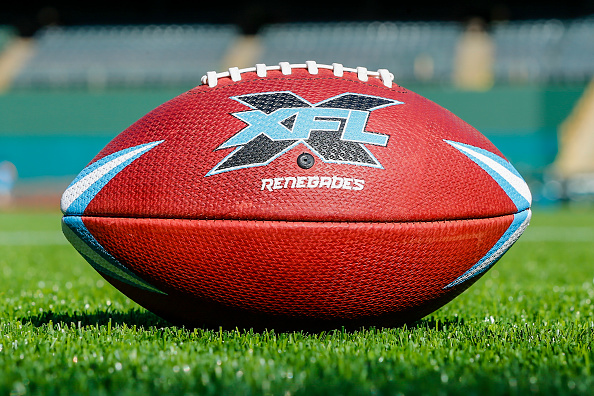 A Dallas Renegades football lays in the grass during the open practice for the XFL Dallas Renegades on February 1, 2020 at Globe Life Park in Arlington, Texas. (Photo by Matthew Pearce/Icon Sportswire via Getty Images)

SAN ANTONIO (KTSA News) — The XFL is rising from the ashes and is reportedly eyeing San Antonio as home to a franchise.

The Richmond Times-Dispatch said Friday that Head Football Coach Reggie Barlow resigned from his position at Virginia State University to take the job in San Antonio.

Barlow coached at VSU for six years with an overall record of 34-16. He previously played in the NFL for five seasons with the Jacksonville Jaguars, one season with the Oakland Raiders and two years with the Tampa Bay Buccaneers (including one Super Bowl win in 2003).

The XFL has not confirmed what cities will be represented on the 2023 roster, nor has the City of San Antonio weighed in.

The football league filed for bankruptcy after suspending games five weeks into the 2020 season over the global COVID-19 pandemic. The XFL was acquired later that year by Dwayne Johnson, Dany Garcia and RedBird Capital Partners for $15 million.

“The acquisition of the XFL with my talented partners, Dany Garcia and Gerry Cardinale, is an investment for me that’s rooted deeply in two things – my passion for the game and my desire to always take care of the fans,” Johnson said in October 2020. “With pride and gratitude for all that I’ve built with my own two hands, I plan to apply these callouses to the XFL, and look forward to creating something special for the players, fans, and everyone involved for the love of football.”

San Antonio was famously home to the Commanders in the Alliance of American Football League. The Commanders reportedly pulled in more than 27,000 fans per game at the Alamodome before the AAF went under eight weeks into the inaugural season.