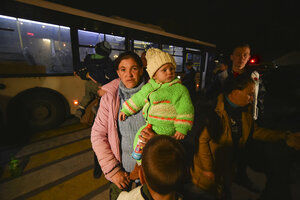 MYKOLAIV, Ukraine (AP) — The Russian Defense Ministry says it has finished pulling out its troops from the western bank of the Dnieper River in Ukraine’s southern Kherson region.

In a statement carried by Russia’s state news agencies, the ministry said the withdrawal was completed at 5 a.m. on Friday, and not a single unit of military equipment was left on the western bank.

The retreat announced earlier this week marks another humiliating setback for Moscow’s war in Ukraine.

Areas the Russian military withdrew from included the city of Kherson, the only regional capital Moscow seized during its 8-month-old war in Ukraine.

A Kremlin spokesman on Friday refused to acknowledge the retreat as humiliating for Russian President Vladimir Putin.