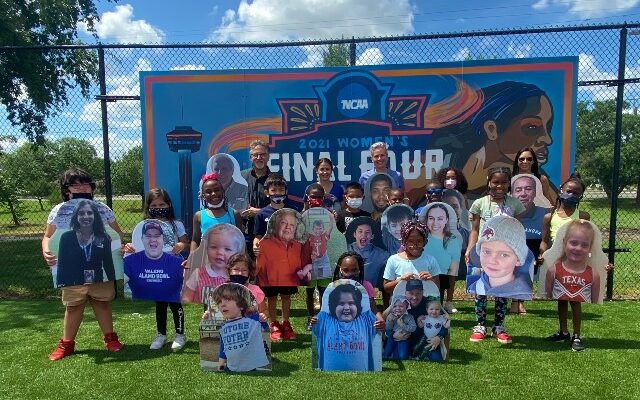 KTSA News/Katy Barber - More than 70,000 locals kids will be fed by the San Antonio Foodbank thanks to a partnership with the Eastside Boys and Girls Club of San Antonio and San Antonio Sports.

SAN ANTONIO (KTSA News) — A partnership between the San Antonio Food Bank and San Antonio Sports during the 2021 NCAA Women’s Division 1 Basketball Championship turned into more than 70,000 meals for local kids that will help combat food insecurity this summer.

The NCAA Sweet 16, semifinal and championship games were hosted here in San Antonio between March 21 and April 4.

San Antonio Sports Senior Vice President Jenny Carnes said that hosting the NCAA championship game was an honor for the community and the partnership produced amazing results that has already had an impact at the Eastside Boys and Girls Club.

Because there was limited capacity for fans to watch the games due to the COVID-19 global pandemic, the NCAA implemented the Fan Cutout program. The program allowed fans to pay $100 to have a cutout of them fill stadium seats at the Alamodome. 100% of the proceeds from the program for the NCAA championship series in San Antonio were split between two national charities and the San Antonio Food Bank.

The program raised more than $10,000 for the San Antonio Food Bank and that translates to more than 70,000 meals for local kids.

Carnes said selecting the Food Bank as a recipient of the funds “was a no brainer.”

“The Food Bank has this crazy efficiency where we can take $1 and provide seven meals,” Michael Guerra, Chief Resource Officer San Antonio Food Bank, said. “So a gift like this of more than $10,000, do the math. It’s more than 70,000 meals for kids. 100 kids come here every day, 500 meals a week just for this site and over the course of the summer that’s 5,000 meals. We could probably cover all the Boys and Girls Clubs and then some with a gift like this.”

Summer is a particularly difficult time for children who face food insecurity year-round, but the Boys and Girls Club and the San Antonio Food Bank work together to fill the gap left by schools being out.

“The Boys and Girls Club has been a long-time partner of the food bank when it comes to meeting the needs of kids,” Guerra said. “They’re looking after all aspects of the kids after school, on weekends, holidays, their physical and emotional health. And that’s where we come in to be a great meal provider to get nutritious meals at no cost to kids.”

The Boys and Girls Club of San Antonio operates six local clubhouses and 37 on-site school locations around the city and serves more than 7,000 kids ages 6 to 18 years old.

The Boys and Girls clubs and the food bank have been partners for many years, Chief Operating Officer Ada Saenz said. It’s because of this partnership, Saenz said, that the clubs are able to serve kids nutritious meals every day during the school year and through the summer.

The pandemic forced the clubs to reduce capacity, but the organizations together were able to service 2,800 families through large-scale food distribution over the course of the year. The clubs also offered kids a place to do virtual learning through the school year, but Saenz says they are happy to be back to normal capacity in order to serve more kids and provide them with a return to regular summer programming that includes events like intramural sports.

Saenz said that some kids they serve every day come to breakfast not having eaten since the club-provided lunch the day before.

“Now, it’s not the norm and that’s not all the kids we serve,” Saenz said. “But it is a good number of kids who struggle with food insecurity. It’s extremely meaningful to have that partnership to help fill that void.”

The partnership between all three non-profit organizations goes further than providing much-needed meals for kids.

In March, the NCAA and San Antonio Sports sponsored the building of the NCAA Dream Court, a publicly available basketball court outside of the Eastside Boys and Girls Club and next to Martin Luther King Park. San Antonio Sports also provides kids with sports skill programming at clubhouses and on-site locations many times over the years.

“Summer is the highest time of need for food, money and volunteers,” Guerra said. ” We’re on the backside of the pandemic and we’re seeing a fair amount of volunteer fatigue. So we’re really trying to encourage the community to come out and help us prepare meals or [participate in] other ways we get food out to families and kids.”