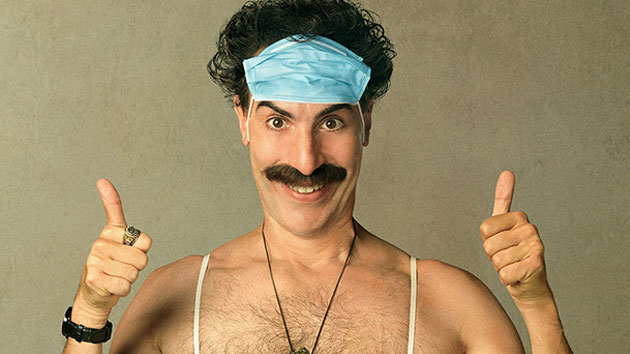 (LOS ANGELES) — Sacha Baron Cohen’s highly anticipated sequel to Borat is out now and the actor opened up about a moment when he feared for his life while filming– when he crashed a right-wing rally.

In a recent op-ed for Time, the 48-year-old actor recounted the event and why he’s concerned about the rise of racism, antisemitism, conspiracy theories and white supremacy in the country.

Cohen admitted that he is “truly terrified – for the survival of democracy itself,” which is why he is speaking out against the “flood of hate, lies and conspiracies spewed by demagogues and spread by social media” that he says has reached a boiling point.

When filming Borat Subsequent Moviefilm, the actor detailed the harrowing moments after he pranked a right-wing rally, masquerading as a singer who led attendees into a racist singalong.

“When organizers finally stormed the stage, I rushed to a nearby get-away vehicle. An angry crowd blocked our way and started pounding on the vehicle with their fists,” Cohen described. “Under my overalls, I was wearing a bulletproof vest, but it felt inadequate with some people outside toting semiautomatic weapons.”

The actor noted of a particularly harrowing moment when “someone ripped open the door to drag me out,” but he was fortunate enough to slam the door shut and escape.

“It would all be hilarious if it weren’t so dangerous,” The Golden Globe winner admitted, fully believing that this is America’s future if people don’t vote.

Cohen noted that, due to the COVID-19 pandemic, people are “especially vulnerable to lies and conspiracies” due to the uncertainty, which is why they are glomming onto dangerous theories like QAnon.

“Conspiracies are lethal—to our health and to our democracy,” the Bruno star warned. “The fate of U.S. democracy now rests with voters.”