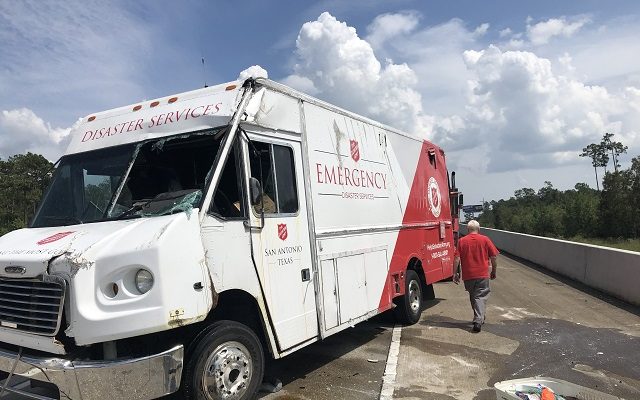 SAN ANTONIO (KTSA News) – Two Salvation Army volunteers from San Antonio are lucky to be alive after a rollover accident on the way to Louisiana.

Brad Mayhar says two women were in the truck Sunday afternoon when the rear passenger tire blew out on IH 10 between Beaumont and Orange, Texas.

“Witnesses say the vehicle went to the left, hit the barrier, spun around, hit the right barrier, fell on its side and slid,” said Brad Mayhar, spokesman for the Salvation Army in San Antonio.

The women were taken to a hospital where they were treated and released.

“It’s bad to lose the truck, but the most important thing is that our volunteers are okay,” Mayhar told KTSA News.

He said it could have been a lot worse.

“We actually have flammable things inside the vehicle.  Because there’s a stove in there, we had propane, and they had just refueled the truck, so there was a full tank of gas,” said Bayhar.

The volunteers were heading to Alexandria, Louisiana to feed and deliver cleaning supplies to first responders and people affected by Hurricane Laura. The women are back home after the harrowing experience.

It remains to be seen when The Salvation Army will be able to replace its San Antonio mobile food truck, which costs about $350,000.   In addition to helping hurricane victims, Mayhar says they’ve been serving meals to individuals affected by COVID-19.

If you’d like to help the Salvation Army raise money for a new canteen, call 210-352-2000 or go to SalvationArmySATX.org.