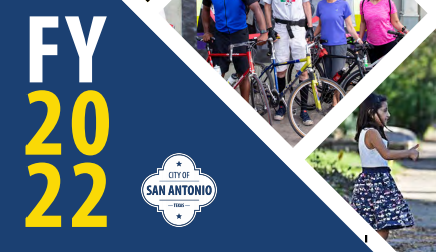 Note: This story was updated throughout at 2:30 p.m.

SAN ANTONIO (KTSA News) — The City of San Antonio’s proposed budget for the 2022 fiscal year was presented to city leaders today and is projected to be the largest budget in city history as it exceeds $3 billion for the first time.

City Manager Erik Walsh made the presentation to Mayor Ron Nirenberg and the city council and focused on key areas that all involve the lessons learned after the global pandemic.

“The proposed budget reflects my commitment to improving and transforming our community through innovation, critical service delivery and support for our most vulnerable residents,” said City Manager Erik Walsh. “While uncertainty due to COVID-19 remains, our charge is clear: provide our residents with high-quality services and help our community recover from the pandemic.

The FY 2022 Proposed Budget makes strategic investments in critical issues that emerged from the pandemic, such as public health, housing, senior services, workforce development through the Ready to Work program and a more open and accessible City government.

The proposed budget is $3.1 billion with approximately $97.5 million coming from federal dollars thanks to the American Rescue Plan Act “to stabilize the City’s budget and address the community’s immediate needs,” the proposal reads.

The general operating fund for the city encompasses $1.36 billion and restricted funds that including airport, development services and solid waste come to $1.12 billion. The capital budget, which funds major improvements to City facilities and infrastructure, comes out to $592.2 million.

The proposed budget will restore cuts to city services made over the last two years including street and sidewalk maintenance, employee compensation, arts and culture programs in addition to economic development incentives.

Walsh wrote that each of these areas will be restored to FY 2019 levels except for employee compensation. Because of a compensation freeze that began January 1, 202, civilian employees will see a 5% pay increase comprised of a 4% recurring increase and a one-time lump sum of 1%. Entry-level wages for city employees will be raised to $16.50 from $15.

A portion of the funding will go to providing Spanish and American Sign Language interpretations at all City Council committee meetings in addition to conducting a study to better understand the community’s language needs as well as , the City’s language access services and best practices of other large municipalities.

“Access to information in the language that a person is most comfortable in is extremely important to our community. The Proposed Budget’s language access services expansion will both increase the availability of information in different languages and will also create audience-specific public awareness campaigns and content,” said Walsh.

A portion of the funding will be aimed at critical issues that emerged from the pandemic in areas of public health, housing, senior services and “overcoming barriers to accessing City government.”

In this area, the city will leverage federal grants for a variety of purposes including allowing the Metropolitan Health department to build on its 5-year- Strategic Growth Plan, adjust the department’s approach to public health that includes a focus on mental health, health justice, access to care, and technology and infrastructure. Additionally, funding will be used to support housing programs and services to the homeless, and to add new financial advisors with the purpose of assisting senior citizens avoid and recover from identity theft, mortgage fraud and other financial scams.

The city is investing $5.4 from the proposed budget into changes coming to the police department including adding 15 police officers. Three of those will be downtown bike patrol officers and the remaining 12 will join the San Antonio Fear Free Environment that proactively engages with residents in an effort to strengthen community policing.

Of the above-allocated funds, the budget introduces multi-disciplinary response teams consisting of a paramedic, mental health clinician and police officer to jointly respond to mental health calls and community advocates will join police in responding to domestic violence, homelessness and substance abuse calls.

Non-emergency calls including loud music complaints, barking dogs and fireworks will not be handled by police, but by other city departments.

The city will expand the Fire Department’s Clinical Dispatch that allows 9-1-1 call takers to provide telemedicine to callers which Walsh said will free up ambulance and paramedic resources to respond to critical emergencies.

“My vision for the San Antonio Police Department is to be the best police department in the nation, in terms of accountability, training and community engagement. Over the past year, we’ve asked our residents to tell us what their expectations of police encounters are and have taken a close look at what calls for service could be responded to differently,” said Walsh. “The Proposed Budget takes a multidisciplinary approach to calls, which will better connect people in crisis to services and will give the police department more capacity to strengthen their relationship with our community.  This work should never end as we continue to stay engaged with our entire community”

The 2022 budget aims to ensure the city’s resiliency in the face of weather events or other such disruptions by allocating funds to conduct a resiliency study, identify and prepare vulnerable residents, develop a coordinate community preparedness education program in addition to replacing critical building systems at key public safety facilities.

San Antonio residents will have the opportunity to attend 10 budget town hall meetings before the city council is expected to adopt the budget on September 16. The townhall meetings will be a mix of in-person and virtual events.

You can read the full 450-page long budget proposal here.