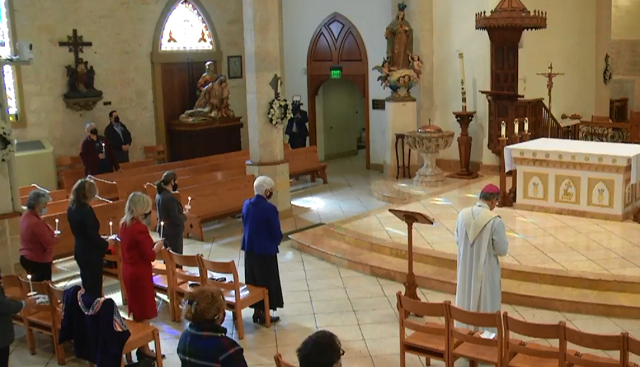 Archbishop Gustavo Garcia-Siller leads a prayer service Jan. 7, the day after the riots at the nation's Capitol/Screenshot-Catholic Television of San Antonio

SAN ANTONIO (KTSA News) – At a prayer service the day after the riots at the U.S. Capitol, Archbishop Gustavo Garcia-Siller said we must all come together and work toward unity to heal the nation.

The leader of the Archdiocese of San Antonio told those in attendance Thursday afternoon at San Fernando Cathedral that it will take time, with God’s help, to heal the wounds.

“We have all been wounded.  We feel it,” said the Archbishop. “We pray that we find peace and reconciliation in our nation in the coming days, weeks, and months ahead.”

Following the service, Garcia-Siller told KTSA News that while we are focused on battling the dangerous coronavirus, we have also been exposed to the “words virus,” words that can hurt and lead to dangerous acts, such as those that occurred Wednesday at the Capitol.

Four people died, including a woman who was killed by police as she breached the Capitol building.  The other three died after suffering medical episodes during the riots.