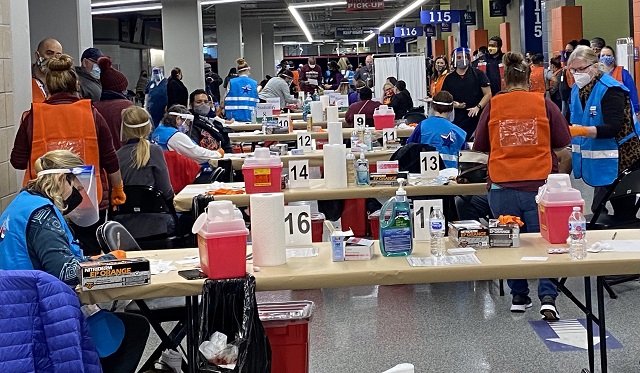 SAN ANTONIO (KTSA News) – San Antonio is getting a COVID-19 vaccine registry, but it won’t be available for a few weeks.

It’s something Councilman John Courage has been proposing for months after hearing complaints from constituents expressing their frustrations over failed attempts to secure an appointment because of jammed phone lines and crashing websites.

“This is not guaranteeing you an appointment today.  What it is guaranteeing is that you’re on a list for providers to call you and tell you where to go and when to be there to get your shot,” said Courage.

When the District 9 councilman first brought up the idea, Assistant City Manager Colleen Bridger countered that a waiting list would only add to the frustrations with people waiting and wondering when they would be called.  City Council on Thursday approved a pilot program  with Health Access San Antonio (HASA), which will be open only to people 65 and older, but if it’s successful, it will include other categories.

Councilwoman Shirley Gonzales told her colleagues Wednesday that the real problem is not having enough vaccines.

“I’m just not entirely convinced that it’s going to solve any of the issues that we’ve had,”said Gonzales.

Sandoval likened the current process of signing up for a vaccine to a lottery system where “only those with fast internet and flexible schedules can win.”  Her concerns intensified when the governor recently opened up eligibility to include all adults.

“It’s  not a silver bullet,” said Sandoval. “It will not bring us more vaccines.”

Councilman Manny Pelaez wondered if the registry is just a “placebo to pacify city council members” and the people who were pressuring them to develop a registry.

“If this doesn’t work, then what we’ve got is sort of a list that is like a mullet haircut, which is all business up front and a hot mess in the back,” said Pelaez.