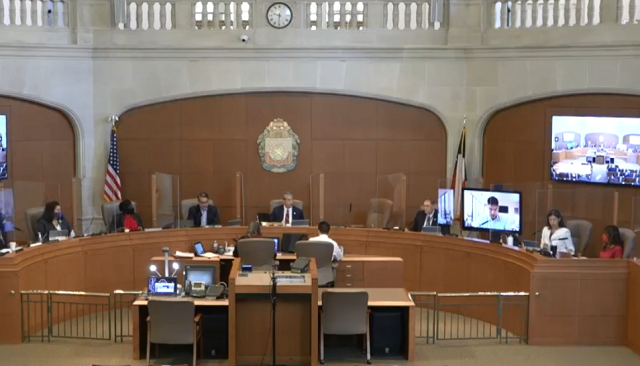 SAN ANTONIO (KTSA News) -The San Antonio City Council met in person Thursday for the first time since June and there was something different on the dais.  Plexiglass screens separated the council members.  They wore masks, but some of them removed the face coverings when they spoke.  City Council members Shirley Gonzales and Manny  Pelaez opted to attend the meeting remotely, and Clayton Perry was absent.

The usual COVID-19 protocols were in place, including blocked off seating in the Norma Rodriguez City Council Chambers.  Masks are required for everyone attending the meetings and guests must have their temperature checked at the entrance.

One of the items on the agenda was the awarding of a 5-year contract worth $18.2 million to provide 700,000 meals a year at senior centers in San Antonio.  Selrico Services, Inc. has held the Senior Nutrition Program contract with the city’s Department of Health and Human Services since 2004, but city staff recommended Meals on Wheels this year, over the objection of  Councilwoman Gonzales. She argued that Selrico Services is better qualified to do the job and city council should support local small, minority-owned businesses.

“I’ve always thought Meals on Wheels provided a great service, but they’re currently not prepared to do the service that Selrico does,” said Gonzales.

She made a motion to award the contract to  Selrico Services, but there was no second, and the motion died.  Starting in January, Meals on Wheels will provide up to 2,700 meals a day to senior centers.

“We take great pride in receiving this vote of confidence from the San Antonio City Council,” said Vinsen Faris, CEO of Meals on Wheels San Antonio. “We are delighted to enrich the Senior Nutrition Program with all we have learned about older San Antonians in the last four decades.”

At Thursday’s meeting, a group of silent protestors sat in the council chambers, holding signs calling for justice for a Black man who was shot and killed last month during a struggle with San Antonio police.  The protestors  want police to release bodycam footage of  Darrell Zemault’s shooting outside his West Side home.