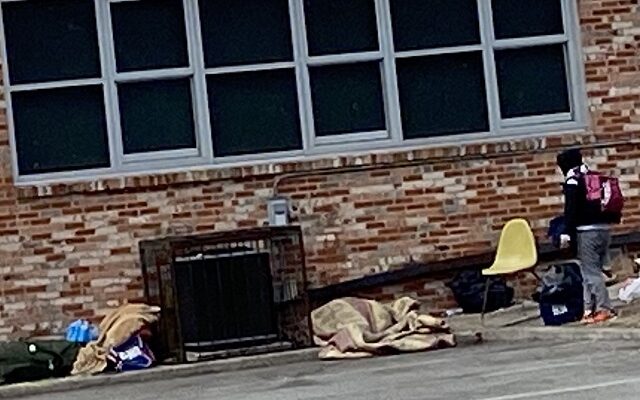 SAN ANTONIO (KTSA News) – A San Antonio City Councilman who allows homeless people to stay outside his Northwest side office spent the night there Thursday when he found out the city was planning to clear out the encampment early Friday. The crews did not show up.

District 1 Councilman Roberto Treviño told KTSA News that the the city manger made the decision without consulting with his staff.

“I didn’t know when the so-called abatement was going to happen and I didn’t want anybody to be caught by surprise,”  Treviño said outside his satellite office on Vance Jackson at IH 10. “I just wanted to make sure that nobody was harassed.  I wanted to see for myself that if somebody was going to be asked to move along, how they were treated.”

Blankets, bags and other items were leaning against the building  with homeless people coming and going.  On the North side of the building, one man wrapped in a blanket was sleeping next to a grocery cart containing several items.

Treviño says it’s not an encampment with only six to 12 homeless people on the property at any given time. He says “homelessness is not a crime” and if someone goes to his office for help, his staff will do what they can to provide assistance. He’s concerned about encampments being cleared out without knowing where all of the people will go.

That’s also a concern for  Dellview residents who worry that the people displaced from the large encampment under IH 37 at Brooklyn Avenue Wednesday will move to IH 10 at Vance Jackson.  They say they wish the councilman had as much compassion for the taxpayers as he does for the homeless.

“They panhandle, they urinate, they live in buckets, they live in tents, they do drugs,” Ann said on the Sean Rima show on KTSA. “We have pictures of them strung out and lying in the concrete ditch.”

Treviño says he has been working on their concerns and he pointed to the motel across the street which “has seen a transformation.” But residents say they want to be able to stop at Bill Miller’s and shop at Walmart without being harassed by panhandlers and vagrants.

“I tell people to call police if they see a crime,” the councilman said.

His office building is adjacent to the city’s Westfall Library where two recent fires were set in the exterior of the building.  A patron who identified himself as Cecil was at the library Friday morning.   He says the panhandlers sometimes are aggressive.

“They’re relentless.  I see them when I go to Walmart.  I see them at the bus stop, and they sleep in the alley behind my apartment complex,” he said.  “Police disperse them, but they’ll hide at the 7-11 and the Shell station until the officers leave and they go back to panhandling.”

City Manager Erik Walsh says they’ve been working with people who camp out at Treviño’s office since last summer.

“If an encampment poses a health and safety concern or is fostering felony-level criminal activity, we abate it, but only after substantial outreach to provide help to the people there,” Walsh said in a statement obtained by KTSA News. “We went by the District 1 Field Office last Friday night and felt the area needed to be addressed.”

He asked the Department of Human Services to work with the individuals and secure a place for them to get the help they need.

“We don’t just ‘order’ abatements without outreach and care. My direction was to address the need, safety, care and protection of all involved,” Walsh said.

After meeting with Treviño, he agreed to postpone the abatement at the councilman’s  Vance Jackson office and allow people to continue sleeping there for two or three weeks  as  city staff works to get the individuals connected with appropriate services.

“Our goal is to eliminate the need for the encampment in the coming weeks,” said Walsh.

“We have been working with the group of people camping at the District 1 Field Office since last summer, including daily interactions for the past month. If an encampment poses a health and safety concern or is fostering felony-level criminal activity, we abate it, but only after substantial outreach to provide help to the people there.

I went by the District 1 Field Office last Friday night and felt the area needed to be addressed. I asked the Department of Human Services and outreach staff to work with the individuals to secure a place for them to get the assistance they need. We don’t just “order” abatements without outreach and care. My direction was to address the need, safety, care and protection of all involved.

Criminal behavior at the encampment will not be allowed. We also will be enforcing no trespassing, camping, drug activity, defecating, urinating, and loitering at the adjacent Westfall Library, the parking lot and the grassy areas. It is essential for Library users to feel safe and secure when using the library.

I have met with Councilman Trevino and agreed that for the next 2-3 weeks, we will continue to allow people to sleep at the District 1 Field Office.  The City’s Department of Human Services will work with our partners and the Councilman’s staff to do intense case management and get the individuals who need help connected with the appropriate services.  Our goal is to eliminate the need for the encampment in the coming weeks. We will continue to monitor the situation.” – City Manager Erik Walsh