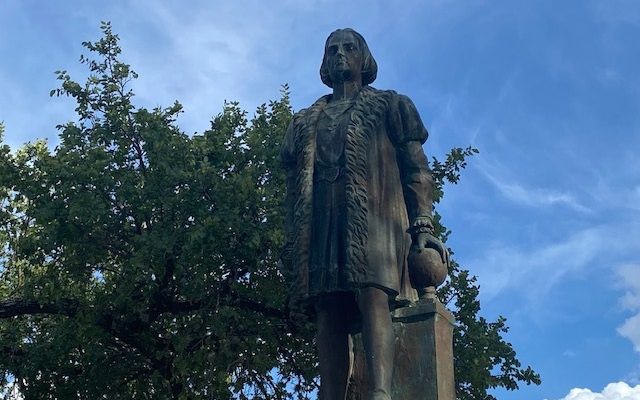 SAN ANTONIO (KTSA News) – San Antonio City Councilman Roberto Trevino is asking his colleagues to support removing the statue of Christopher Columbus from downtown San Antonio and changing the name of  Columbus Park, which is near West Martin and IH 10.

In a Council Consideration Request filed with the City Clerk’s office this week, Trevino asks that the item be considered at the next meeting of the council’s Governance Committee.

“The Italian Society and its board have requested the removal of the statue and will accept the return of the statue to their organization,” Trevino stated in the city document , which has been signed by four of his colleagues.

Society board member Paolo Cristadoro told KTSA News after seeing the desecration of Columbus statues in other parts of the country, they worked with Trevino to come up with a plan to protect the sculpture that the Society donated to the city in 1957.

“The last thing we wanted to do was create a political firestorm,” said Cristadoro. “We collaboratively came up with a plan to do this correctly.”

He said the Society hasn’t decided what to do with the statue if the city council approves its removal.  Cristadoro says someone spray-painted the statue last October.

“Although the Christopher Columbus statue in the park does not have the same associated feelings for us as it does for others, we want to be respectful and considerate of what it symbolizes  and how it impacts them,” said Cristadoro.

The  Italian Society also supports the renaming of Columbus Park to Piazza Italia.

“This was a collaborative effort.  We came to an agreement to discuss steps to not only protect the statue, but protect the property,” Cristadoro explained.

The Italian Community in San Antonio founded the Christopher Columbus Italian Society in 1890, making it one of the oldest Italian societies in the country.   They built San Francesco di Paola Catholic Church in 1927 and the Italian Hall the following year.  The Society donated the Christopher Columbus statue, which was made in Italy, to the City of San  Antonio in 1957.

“With the renaming  of the park, the City will continue to honor the significant contributions Italian immigrants made to our community in the heart of their former neighborhood.  To recognize the site of the Italian neighborhood, the Italian Society will work with the Office of Historic Preservation on the creation of a plaque marking the location of the neighborhood that will be placed on the plinth of the removed statue,” stated Trevino.