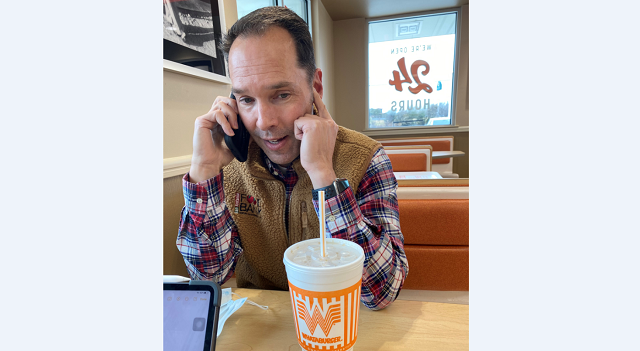 SAN ANTONIO (KTSA News) -In the midst of a 29-county emergency food and water response effort following the devastating winter storm, San Antonio Food Bank President & CEO Eric Cooper was taking a short break at a local Whataburger Wednesday when he got a surprise phone call from the White House.

Vice President Kamala Harris’  husband Doug Emhoff reached out to Cooper to check on San Antonio and the Food Bank’s response effort.  Emhoff asked about the community’s recovery efforts  and how the Food Bank team was holding up.

Food Bank spokesman Miguel Guerra says Cooper shared the challenges of water and the fragility of the power grid that crippled so many, but he praised San Antonio for coming to the rescue and expressed his appreciation for the support of neighbors.  Cooper mentioned the selfless volunteers, the donations of food, water, and funds, and talked about the way San Antonians make sure nobody is left behind.

Emhoff told Cooper the administration is focusing on the problem of food insecurity and  they want the San Antonio Food Bank CEO to be part of the conversation.  President Joe Biden and the First Lady plan to visit Houston o Friday.

“All in a day’s work for the CEO who is helping fight hunger and feed hope for South Texas,” said Guerra.

Earlier this week, actress and philanthropist Eva Longoria helped the Food Bank deliver groceries to local residents affected by the winter storm and the pandemic.

The actress from Corpus Christi and founder of Eva’s Heroes went door-to-door delivering food, water, pet food and other items.

One man was heard asking,”Where’s my girl?” When somebody pointed out the petite actress, he said he thought she would be taller.  She laughed and said TV makes her look taller.

The San Antonio Food Bank is in need of donations and volunteers to help with home deliveries, cooking meals, working the mobile mega distributions and assisting in the warehouse.

Trump says he took the Fifth Amendment in NY investigation