San Antonio honors the legacy of Martin Luther King Jr. with a march down MLK Drive 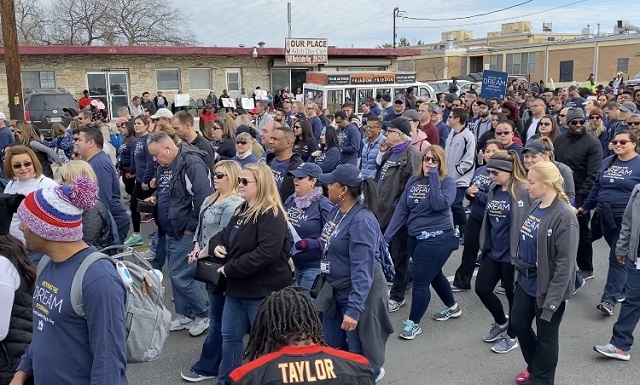 SAN ANTONIO (KTSA News) – People from all walks of life participated in San Antonio’s Martin Luther King March, which is touted as the largest in the nation. “Marching for Peace, Justice, Love and Unity” was the theme of the 2020 event which was expected to draw an estimated 300,000 people.

The 2.7-mile march started at Martin Luther King Academy on MLK Drive and ended with a commemorative ceremony at Pittman-Sullivan Park on Iowa Street.

James Johnson was born and raised in San Antonio, but he moved to Michigan and retired from the General Motors plant in Detroit a few years ago. He flies in every year to participate in the Martin Luther King March.

“I went to school right there at Riley School,” he said, pointing at what is now MLK Academy.

He chooses to participate in the Dream Week activities here in San Antonio instead of Detroit.

“San Antonio’s got the best march in the nation and I’m proud of that because I was born and raised here,” he said.

Johnson wore a red-white-and-blue sweater for the march, saying he’s grateful for the opportunities this country has given him.

“I experienced a lot of segregation. I went to segregated schools in Arkansas until I was in the 10th grade,” said Cheatom.

He remembers the separate water fountains and restrooms. Cheatom saw the difference in waiting rooms at the dentist’s office when he helped his father, a janitor, clean the clinic.

“I cleaned the colored waiting room as well as the whites-only waiting room, and I saw the difference as a young child,” he said. “I didn’t understand it.”

As an officer in the local Buffalo Soldiers Association he tells the story of the African-American soldiers who helped settle the Western frontier after the Civil War.

Paulette Burns has served as one of the marshals of the MLK March for several years. She says this country has made great strides in the area of civil rights, but the work must continue.

“We’ve got to continue to push because Martin had a dream, but we’ve got to fulfill it,” said Burns.

Congressman Will Hurd was in the VIP section of the march honoring Dr. King’s legacy.

The late Rev. Raymond  Callies, Sr. started leading processions in San Antonio soon after Dr. King’s assassination in April of 1968. Nearly 20 years later, the march became an official City of San Antonio event when Henry Cisneros was mayor. Monday, he was among the dignitaries leading the MLK March.

“We actually made it a city-sanctioned march and it’s one of the best things we could have ever done,” Cisneros told KTSA News. “It gave an outlet for all of that natural instinct of coming together, working together and respecting each other that is San Antonio.”