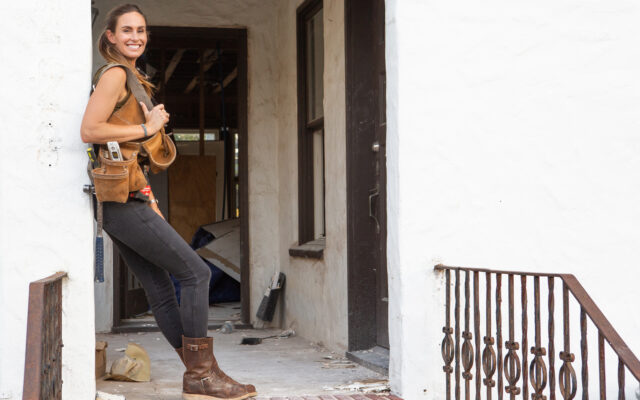 Photo courtesy of HGTV / Designer Kim Wolfe at a home currently under construction for HGTV's Why the Heck Did I Buy This House?

SAN ANTONIO (KTSA News) — A San Antonio resident is putting the spotlight on the Alamo City in a new HGTV show that premiered last week.

Why the Heck Did I Buy This House? is hosted by Kim Wolfe, who has lived in San Antonio for the last 15 years.

This isn’t Wolfe’s first foray onto television. 10 years ago she competed on Survivor: One World and walked away with the win and a million dollar prize.

“It was so fun to get to do TV in an arena that I’m really passionate about,” Wolfe said to KTSA News. “Not that I’m not passionate about, you know, starving in my underwear and growing a mustache on TV, but I’m just so excited about the transformation of homes. This was really like having two circles of passion that came together for me. It was really fun.”

The homes featured in Why the Heck Did I Buy This House? are not just some renovations, Wolfe said. They are completely overhauling homes to help homeowners shake their buyers remorse and fall back in love with their properties.

Wolfe said the motivation to do these home overhauls comes from close personal experience.

“When I won the million dollars on Survivor, my husband and I bought a fixer upper over in the Monte Vista area of San Antonio that needed to be completely overhauled,” Wolfe said. “I was overly optimistic thinking it would be a super smooth transition and it was terrible — almost relationship ending — but we learned a ton through it and wanted to keep doing it.”

Wolfe said they continued doing some personal renovation projects for a while before her husband eventually floated the idea of trying to make this a career for the two of them.

Now, Wolfe is featuring seven San Antonio home overhauls on Why the Heck Did I Buy This House?

Six of the homes are located within Loop 410 and mostly built between the 1960s and 1970s. The home overhauls were all completed in a 24-week period between March and September 2021.

The first episode of the show premiered last week and she said reliving the ups-and-downs of the build was a blast.

“Like the build started out so fun, we were so excited and all geared up for it. And then it was like the messy middle where we didn’t have refrigerator handles, people weren’t showing up and everybody was cussing,” Wolfe said with a laugh. “Then it was fun again and all of a sudden to be there with the homeowners, the contractors, and everybody’s happy. It was really just kind of like a big party.”

Why the Heck Did I Buy This House? airs Wednesdays on HGTV at 8 p.m.

More about:
Buyers remorse
HGTV
Kim Spradlin
Kim Wolfe
San Antonio
Survivor
Survivor One World
Why the Heck Did I Buy This House?