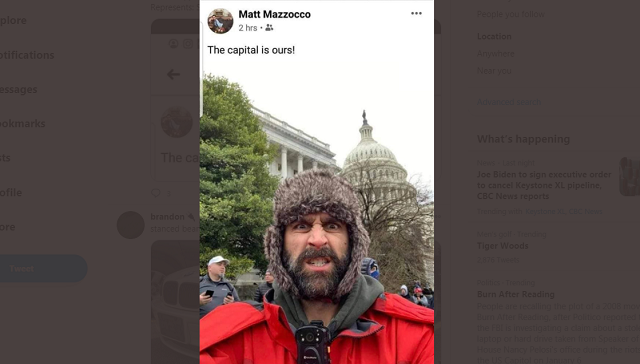 SAN ANTONIO (KTSA News) – A San Antonio man charged in connection with the insurrection at the U.S. Capitol earlier this month made an initial court appearance Tuesday afternoon via Zoom.

Thirty-seven-year-old Matthew Mazzocco wore a navy blue prison uniform and a mask as he sat in a room with guards waiting outside the door.  Mazzocco is charged with knowingly entering or remaining in a restricted building or grounds without authority, which is a Class A misdemeanor, which carries a penalty of up to one year behind bars and a maximum fine of $100,000.  He’s also charged with disorderly conduct on Capitol grounds, which is punishable by up to six months in prison and a maximum fine of $5,000.

Federal Judge Henry Bemporad read the charges and explained that he would set a $25,000 unsecured bond and allow Mazzocco’s release, pending two upcoming hearings.  Mazzocco is set to appear in Bemporad’s court January 26.

The judge said during this time, Mazzocco is allowed to travel anywhere within the continental United States, except Washington, D.C., unless it’s for the purpose of court proceedings.  He also ordered Mazzocco to avoid contact with potential witnesses in the case.

During the hearing, Mazzocco repeatedly nodded as Judge Bemporad read the charges and explained the terms of release.

Mazzocco is a loan officer whose arrest has cost him his job with Synergy One Lending.

In a Facebook post, which has now been deleted, Matt Mazzocco is seen in  a photo with the Capitol in the background.  The caption reads,”The capital (sic) is ours.”   Video posted on TikTok shows him in the Capitol with Trump supporters.  He’s heard telling others not to vandalize or break anything.