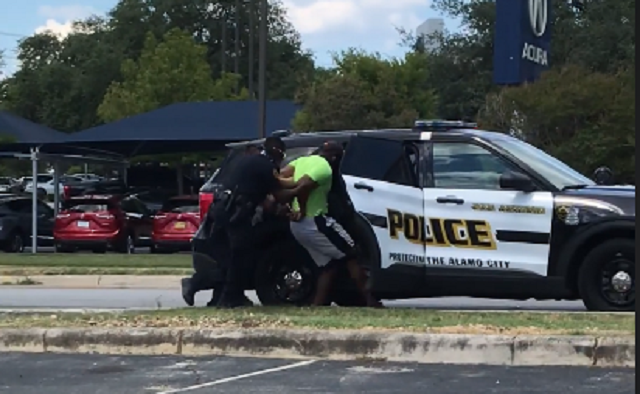 SAN ANTONIO (KTSA News) – Mayor Ron Nirenberg wants to see police body cam video of the arrest last week of a Black jogger mistaken for a suspect in a family violence case.  Thirty-three-year-old Mathias Ometu wasn’t the man they were looking for, but police say he refused to identify himself and he’s accused of kicking two officers as they shoved him into a patrol car.

“I’m asking for the body cam footage and I’d like it to be released publicly, and I believe it will be,” said Nirenberg.  “We have to treat these issues seriously and the outcomes have to be from the basis of equity for every person.”

Attorney Victor Maas and his girlfriend, Jenny Rodriguez, videotaped the incident on their cell phones August 25 on Woodstone near IH 10 and posted the footage on Facebook.  In the video taken by Rodriguez, Ometu is heard yelling, “You’re choking me, you’re choking me,” as he’s being shoved into a patrol car.

Police say Ometu refused to identify himself or provide any information to police before they put him into a patrol car. Police say he matched the description of a man who punched and choked a woman nearby and he was wearing a green shirt and shorts as the victim had reported.

Ometu, an insurance adjuster with no criminal record, is out on bond on two charges of assaulting a peace officer.