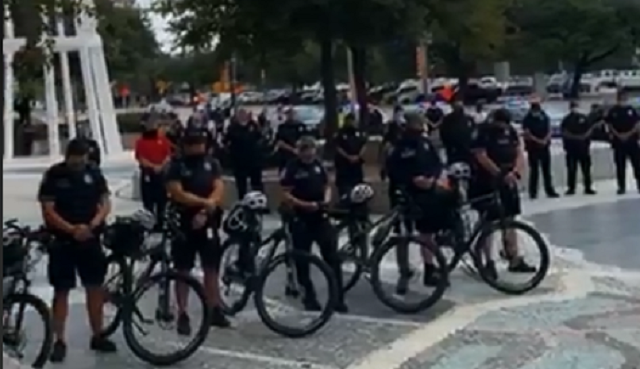 SAN ANTONIO (KTSA News) -The San Antonio Police Department held  a 9/11 memorial ceremony honoring first responders who gave their lives to save others 19 years ago today.  Three-hundred-forty-three New York City firefighters and 60 police officers gave their lives in an attempt to save others from the burning World Trade Center.

“They went into that building knowing that they may not come out, but they also knew the calling that they had in their lives,” said Greene. “Firefighters, police officers–we all know what that calling is.”

In the ceremony outside the San Antonio Public Safety Headquarters that included bagpipes, rifle volleys and the playing of Taps,  Greene quoted a Bible scripture, John 15:13.

“No greater love hath no man than this, that he may lay down his life for his friends,” read Greene, adding, “That’s a choice.”

Nearly 3,ooo people lost their lives September 11, 2001 when 19 hijackers used planes for a series of attacks on American soil.