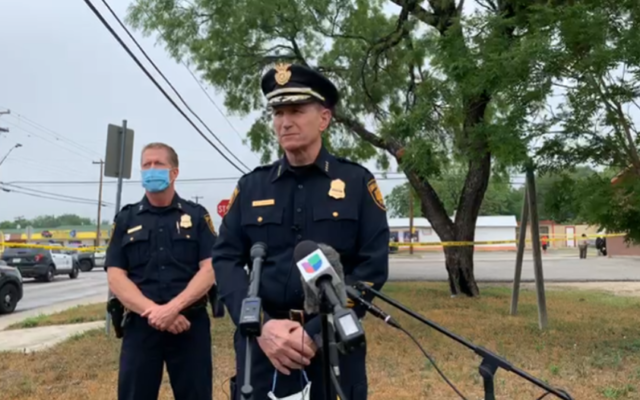 BEXAR COUNTY (KTSA News) — Two are dead and two — including a San Antonio police officer — were injured in a traffic stop shooting on San Antonio’s West Side Friday morning.

“It was a routine traffic stop that turned out to be not so routine,” San Antonio Police Chief William McManus told reporters Friday afternoon.

The police chief said a patrol officer pulled over a truck with three people inside in the 2200 block of Pinn Road earlier Friday for a traffic stop.  He did not know at the time what prompted the traffic stop.

McManus said he watched the video from the stop, but it did not have sound on it.  From the video, it appeared the officer was having a seemingly casual conversation with the people inside the truck for a few minutes.

At some point, the driver in the truck pulled out a gun and shot at the officer, striking him in the hand and in his radio.

The police chief said the patrol officer retreated and returned fire, striking all three people in the truck.  The driver and a passenger were killed, a second passenger was also struck by a bullet and was taken to an area hospital.

The officer was taken to a hospital where he is being treated.  McManus said he did not know at the time what the officer’s condition is.

The two deceased are men in their 20s.  The wounded passenger was a woman.

Stay connected with KTSA for the latest on this story.