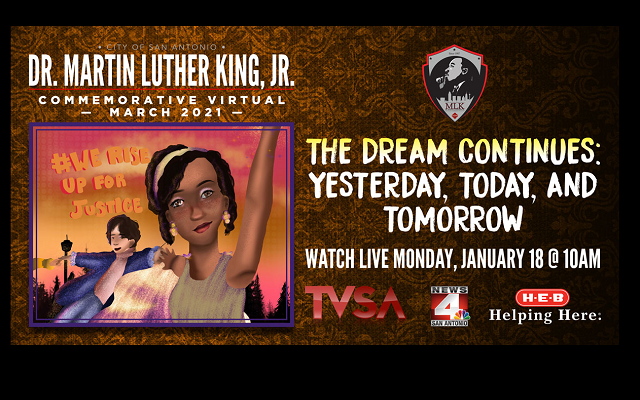 SAN ANTONIO (KTSA News) -The Martin Luther King Jr. March in San Antonio is touted as the largest in the country , drawing up to 300,000 participants, but not this year.  Because of the pandemic, the 2021 event went virtual.

A video titled “The Dream Continues” was broadcast on News 4 San Antonio, TVSA and on social media. Ya’Ke Smith, a film professor at the University of Texas at Austin, produced the film, which featured photos from previous marches and focused on members of the community who have been instrumental in keeping Dr. Martin Luther King’s dream alive in San Antonio.

The theme for this year’s MLK celebration is “Dream: Rising up for Justice.”

“Economic Justice is true social justice,” said MLK Commission Chair Renee Watson. Now is our time to lead, to teach, to organize, to fight, to endure, and to carry on the dream and the legacy of the reverend Dr. King.”

Smith said one of his favorite quotes from Dr. King is, “The time is always right to do what’s right.”

That’s the quote that Mary Lanoue-Gers wrote on the poster she carried as she walked with another woman and a toddler in Universal City.  The MLK Commission had encouraged families to take walks with their families in their own neighborhoods in honor of King.

Organizers  emphasize that MLK Day is a day on, not a day off.  They encourage people who work on community projects.

The San Antonio Martin Luther King, Jr. Commission has designated today as a day of service, so I stopped by J Street…