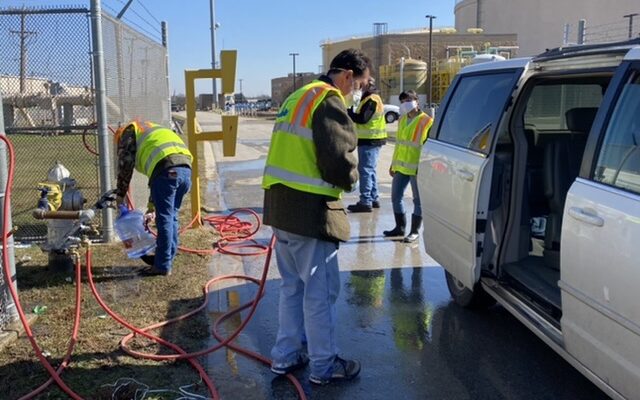 SAN ANTONIO (KTSA News) – They’ve gone for days without running water because of frozen or broken pipes, weather -related service disruption, or they live in apartments where the water has been shut off as a precaution because of the freezing temperatures.

Some who drove to the San Antonio Water System’s Naco Pumping Station in the Northeast Side have young children or elderly parents to take care of.  Katherine Jackson is one of hundreds who showed up Friday with buckets and jugs at the drive-thru location.

”My mother is 94 years old. My father’s in a wheelchair,” Jackson told KTSA. “I can use this water to clean them and wash their hair. Thank God we have power.”

Cocoa Whitaker took her sister to the Naco pumping station because the pipes at her sister’s residence burst.

“This would have been my fifth day with no running water, but I got it back today,” said Whitaker, The water pressure is low, and now my sister has no water because the pipes burst.”

Angelica Penny and her family have been without power or water this week, but she says it has drawn them closer. She and her children resorted to playing board games by candlelight to pass the cold, dark time away.

“Given everything, we’ve been fairly blessed,” said Penny. “We’ve been able to deal with it with the help of our support family.”

SAWS workers from various departments, under the supervision of SAWS Safety and Environmental Specialist, filled containers with water, placed them in vehicles, offered encouraging words, and reminded the recipients that a boil water notice remains in effect.

The Naco pumping station is one of seven bulk water distribution sites across the city that will be operating from 8 a.m. to 6 pm daily until the water problems have been resolved.

You must take your own containers.