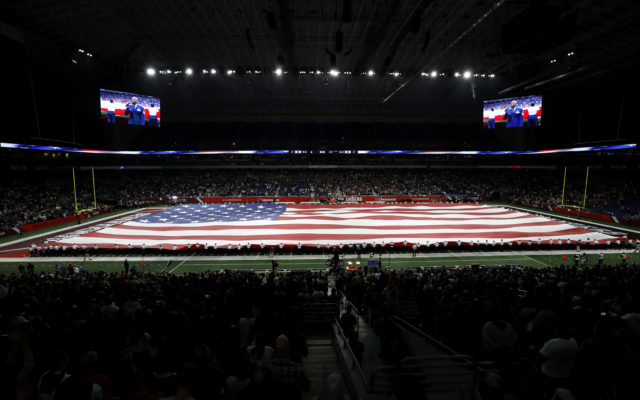 SAN ANTONIO, TEXAS - FEBRUARY 09: A general view during the national anthem prior to an Alliance of American Football game between the San Diego Fleet and the San Antonio Commanders at the Alamodome on February 09, 2019 in San Antonio, Texas. (Photo by Edward A. Ornelas/AAF/Getty Images)

SAN ANTONIO (KTSA News) — The City of San Antonio is looking to figure out what its professional sports present and future look like.

The city posted a Request for Proposals April 30th looking for a firm to do an assessment on the city and whether it would be an attractive destination for a professional sports franchise.  It also seeks to use this assessment to see what short-term and long-term opportunities may exist, as well as advising on a strategic plan to act on those opportunities.

The city’s quest for another top-tier professional sports team has been well documented, with its many attempts to draw an NFL franchise to the city.  It has also actively tried to bring an MLS team to Toyota Field and has been active in the MLB chatter.

San Antonio saw big success in football recently with the Alliance of American Football, dominating attendance figures.  The San Antonio Commanders averaged about 28,000 fans at their home games while the next two closest cities, San Diego and Orlando, averaged just under 20,000 fans.  The league helped showed the city’s hunger for more professional sports.

The most recent chance — or taste, depending on how you look at it — San Antonio had of getting an NFL team was when the New Orleans Saints played in the Alamo City after Hurricane Katrina.  They ended up returning to New Orleans when it was safe for them to do so.  There had also been chatter on the Oakland Raiders considering a move to San Antonio before they decided to move to Las Vegas.

The city and Bexar County were more or less embarrassed in their pursuit for an MLS franchise — in partnership with Spurs Sports and Entertainment — when the now-former owner of the Columbus Crew used contractual clauses to end up getting a new franchise in Austin, despite that city not taking part in the formal MLS expansion process.  Most local officials, including Bexar County judge Nelson Wolff, say the league’s move killed San Antonio’s chances, but San Antonio mayor Ron Nirenberg said a San Antonio MLS team was still possible.

Major League Baseball has been in the news for the past year or so discussing the possibility of future expansion.  Last year, commissioner Rob Manfred had mentioned cities that could be home to an expansion franchise, including Portland, Montreal, a city in Mexico (likely Monterrey or Mexico City), Vancouver — and San Antonio when he met with local business leaders.

This year, Manfred told ESPN during a broadcast last month he is not going to mention city names because it insinuates that one city has an advantage over another.  He reaffirmed the league has not done any formal expansion consideration with the priority focused on getting new stadiums for the Tampa Bay Rays and Oakland Athletics.  The Rays have been playing in the domed dungeon better known as Tropicana Field for the past couple of decades with several failed attempts to get a new stadium plan moving forward in several Tampa Bay area cities.  The A’s have been trying to get a new stadium in the Bay Area, but have either had their locations be successfully challenged by the San Francisco Giants or had trouble with the local cities getting a deal hammered out.

With those teams, Manfred has repeatedly stated he would very much prefer those teams stay in their current markets, however getting new stadiums for both teams is a priority.  It means relocation is a remote possibility for both teams.

Manfred said he would like to see the league grow to 32 teams to help even out the leagues and improve the logistical process of running the league.  With two possible expansion teams and two possible relocations, it could give San Antonio four chances to nail down a Major League Baseball team.

The other active sports league on the expansion front not called the MLS has been the NHL, though their expansion spree looks to be done for now with the league’s 32nd franchise recently being awarded to Seattle.  Even if the NHL were considering expansion, San Antonio has gotten no attention with fans preferring to see teams in towns like Quebec and Houston being rumored to be a likely destination for a relocated Arizona Coyotes.  However, attendance figures and the local sports scene could suggest the San Antonio-Austin region being an area that could support an NHL team, should the opportunity ever arise.

It is not immediately clear what the city plans to do with this assessment, assuming it finds a firm willing to bid and conduct it.  It could be used for fact finding for the city’s own planning or economic development purposes.  It could also lay the foundation for either more immediate sports facilities plans — like a new stadium for the AAA level San Antonio Missions, whose current stadium would be described generously as a facility not suitable for AAA play — a “short-term” opportunity as the RFP seeks or another grand strategy push for a team like it did with the MLS.  It would be assumed if it is to consider a new baseball stadium, the city would want to know how likely it would be for it to attract an MLB team before deciding what it wants to do with or for the Missions.

The RFP has a deadline of May 31st.  After that, the city will select the firm to conduct the assessment.  It’s not clear what the turnaround time would be on that assessment.