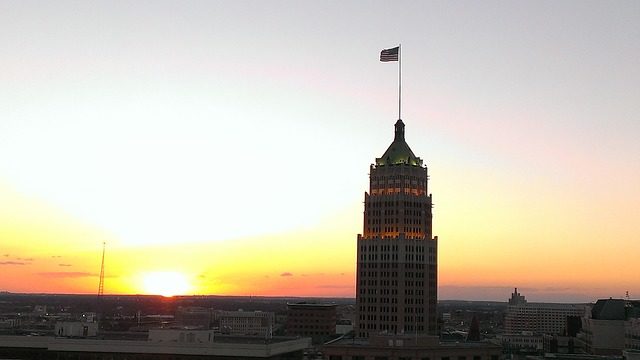 SAN ANTONIO (KTSA News) — The City of San Antonio released its a draft of its Climate Action and Adaptation Plan to the public this week.

The city laid out several goals with the effort — including eliminating all carbon-fueled vehicles in the city by 2050.

There are 28 goals the city has for people who live and work in San Antonio to meet that it says would accomplish its goal of a cleaner environment to fend off global warming and greenhouse gas emissions.

From an energy production standpoint, the city wants to eliminate carbon emissions from the CPS Energy power production systems by 2050, encourage large-scale clean-energy projects focused on renewable and waste energy, and transition all buildings from natural gas use to all-electric.

From a building energy consumption perspective, the city wants to legislate how much energy buildings use, give all energy consumers a rating on how much water and power they use, adopt a “net zero energy” building code by 2040, reduce city-wide energy use by 40% by 2040, and reduce water consumption.

On the roads, the city wants to eliminate carbon-emitting vehicles in the city by 2050, reducing the number of miles people travel by car and replace that with more diverse transportation options, improve “micro-mobility” with tools like bikes, support more compact and cost-effective development, and use big data to help maximize transportation efficiency.

The plan also pushes to improve the natural landscape with native plant species, mitigate the urban heat island, and use climate change considerations during the permitting process.

The city adds it plans to push incentives to make this plan happen, including changing electricity and water use rates to “support greenhouse gas reductions.”

The City of San Antonio also has 13 goals for the city government to accomplish.

It seeks to publicly disclose how much energy and water all municipal buildings use, have all city buildings be zero-net energy by 2040, install “cool” or “green” roofs on city buildings, convert all streetlights to LED by 2021, all fleet vehicles to carbon-free by 2025, plus other benchmarks.

Along with these “action plans” the city has, it also has another lengthy list of what it calls “adaptation strategies”.  There are 45 strategies on that list.

Those goals focus on mitigation natural disasters and damage from the additional number of high-damage storms the city says we will all be facing because of climate change.

Most city government leaders are onboard with moving forward with this plan.

“Through extensive community involvement, we’ve arrived at a plan that frames how San Antonio will guarantee our children and grandchildren have a healthy climate to live and thrive in,” said San Antonio city councilwoman Ana Sandoval. “Working together with this plan as our guide, we’ll curb climate change’s most disruptive effects.”

Others are pumping the brakes.

“Over the last two days, there has been conversation regarding the removal of gasoline powered vehicles from City streets by 2050,” city councilman Greg Brockhouse said in a statement. “This is a key part of the SA Climate Ready Plan that was released by the City of San Antonio for public review. It is important the Mayor and City Council withhold judgment until the public and business communities have a voice in this process.

The public will be able to review the plan and offer their thoughts at a public meeting from 5-7 p.m. on February 19th at the Central Library at 600 Soledad.