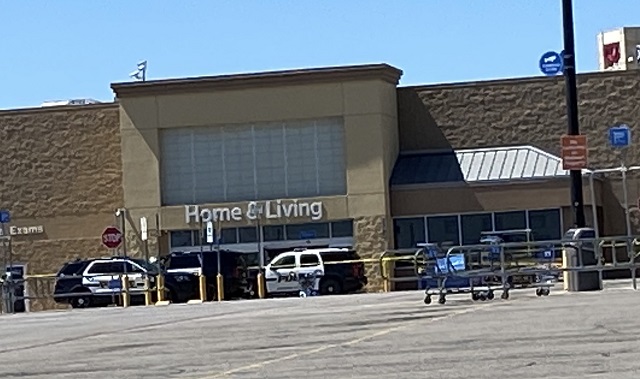 Police arrested an adult male and two teenage suspect who ran into the Walmart on Vance Jackson near IH 10 March 18, 2021/KTSA Photo-Elizabeth Ruiz

UPDATE:  Police have arrested two teens and an adult in connection with the botched sale of a stolen automobile that resulted in shots fired and a two-mile chase that ended at a  Northwest Side Walmart Supercenter.

Officer Chris Ramos says the incident began Thursday morning when a woman whose car was stolen Monday night took the law into her own hands in an effort to retrieve her vehicle. She saw her car for sale online, contacted a 20-year-old male relative, and set up a “buy” on Clower Street.  They    showed up  for the meeting with a 15-year-old male and a 15-year-old female and at some point, there was an exchange of gunfire between the two males.

The teenage suspects took off in the stolen Kia and  the man and woman followed them.   Police say shots were fired during the two-mile route which ended at the Walmart on Vance Jackson and IH 10 when the stolen car’s two front tires went flat.   Police say when the teens ran into the store , the boy was brandishing a gun, which was later found outside.  No shots were fired at the Walmart, but the store was evacuated.

Ramos is urging area residents not to take the law into their own hands.  If you see your stolen property being sold online, call police.

SAN ANTONIO (KTSA News) – A Northwest Side Walmart store remains closed after a disturbance involving a man with a gun.

Officers were called to the store on Vance Jackson shortly before noon and employees were forced to evacuate.

Police say it was not an active shooter situation. Employees are helping direct traffic away from the parking lot as the investigation continues.