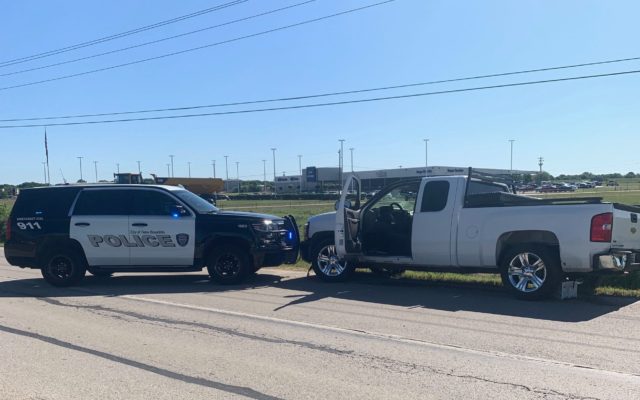 BEXAR COUNTY, Tex. (KTSA News) — A San Antonio woman was arrested for stealing a pickup truck in San Antonio and leading police on a chase into Hays County Thursday morning.

New Braunfels police said they were notified by San Antonio police at around 9:20 a.m. that a white Chevrolet pickup truck had been stolen from San Antonio — along with the owner’s handgun — and that it would be entering New Braunfels.

New Braunfels officers spotted the truck going northbound on Interstate 35 near FM 306 and tried to stop the driver, but she refused.

She continued speeding north before pulling over onto the shoulder near Watson Lane.  Officers tried to order her out through verbal commands, but she refused and instead sped away.

Police said the pursuit continued through San Marcos and came to an end just south of Kyle when New Braunfels police officers were able to successfully use the PIT maneuver to stop the truck.

Officers again tried to command the woman to exit the truck, but she again refused.

The officers on the scene then shot the woman with a direct impact foam round fired from a 40mm rifle — a less lethal department-issued weapon.

The woman surrendered to police immediately after without further incident or injury.

No one was hurt during the pursuit.

The woman — identified as 28-year-old Rachel Vaquera of San Antonio — was taken to a New Braunfels area hospital as a precaution because of the PIT maneuver collision and the use of the foam bullet rifle and has since been medically cleared.

She was arrested on charges of unauthorized use of a motor vehicle and evading arrest.