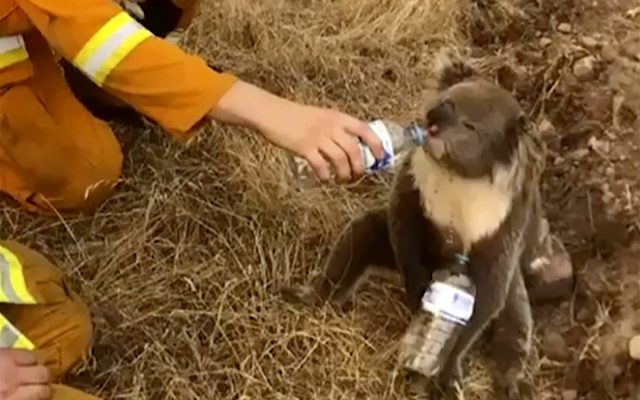 FIEL - In this image made from video taken on Dec. 22, 2019, and provided by Oakbank Balhannah CFS, a koala drinks water from a bottle given by a firefighter in Cudlee Creek, South Australia. Thousands of koalas are feared to have died in a wildfire-ravaged area north of Sydney, further diminishing Australia's iconic marsupial, while the fire danger accelerated Saturday, Dec. 28, 2019 in the country’s east as temperatures soared. (Oakbank Balhannah CFS via AP, File)

“We’re excited to be able to send a veterinarian and a vet tech,” said Dr. Dante Fenolio, Vice President of Conservation and Research at the zoo. “They are very skilled folks that can really help.”

The San Antonio Zoo also is raising funds to help save Australia’s wildlife.

“We want to be able to provide assistance across the long term because this isn’t going to end once all the fires are put out and some of them are still burning,” said Fenolio.

Since September, fires have killed at least 30 people and millions of animals while ravaging millions of acres.  The crisis has been compounded by record high temperatures and a severe drought, but heavy rain this week has been helpful to some communities affected by the wildfires.  However,  the storms also caused a landslide on a highway.

Australia’s fire season is far from over.

“We are in a situation where we’re going to need to raise funds to continue to provide assistance and that’s why we’re reaching out the public. We really need your help,” said Fenolio.

The San Antonio Zoo also will pay to send a veterinarian and veterinary technician to help their colleagues in Australia.

The zoo featured a special Australian exhibit with two koalas on loan from the San Diego Zoo at the local “Summer Down Under” exhibit. While many of us are familiar with koalas, kangaroos and wallabees, Fenolio notes there are many other animals that have been killed or injured by the fires.

“The vast majority of wildlife that’s being impacted right now are things that a lot of folks don’t think about –reptiles and amphibians, birds, insects and other invertebrates,” said Fenolio.