San Jose mass shooting victims: What we know about the 9 killed 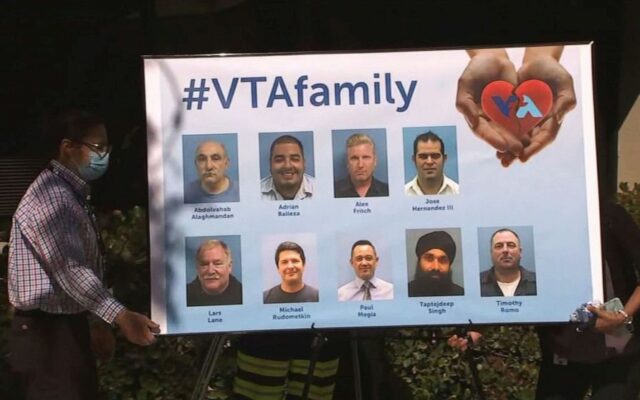 The suspect, also a VTA employee, died from an apparent self-inflicted gunshot wound.

Everyone who was shot died from their injuries.

“Many of these folks worked here for 20, 30 years, so yes, we do become a family,” VTA light rail maintenance operations manager George Sandoval said at a news conference Thursday. “Our staff respond to emergencies on the rail and there’s a bond.”

Abdolvahab Alaghmandan, who went by Abdi, was a substation maintainer who worked at the VTA for about two decades, according to the company.

Adrian Balleza started at the Valley Transit Authority in 2014 and most recently worked as a maintenance worker and light rail operator, the VTA said.

Alex Fritch, a substation maintainer, was the final victim of the massacre, dying hours later in a hospital.

“We got to say goodbyes,” his wife, Tara Fritch, told KTVU.

He leaves behind a daughter, two sons and his wife of 20 years.

“Alex was everything to this family,” Tara Fritch told KTVU. “He was our rock.”

Jose Hernandez was a substation maintainer who worked at VTA since 2012.

While waiting for the victims’ names to be released, Lane’s brother, Edward Lane, told KTXL, “It’s horrible … not knowing is horrific.”

Paul Megia started at VTA in 2002 and most recently worked as an assistant superintendent.

VTA light rail transportation superintendent Nauni Singh said at a news conference, “Sometimes my demands could be unreasonable but Paul always accepted with a smile. Always willing to help.”

Timothy Romo, a power foreman, spent over 22 years with the VTA, The San Francisco Chronicle reported.

The Air Force veteran and his wife had been planning a trip to visit their son, according to the Chronicle.

Michael Rudometkin worked at VTA since 2013.

“My heart is broken,” Peralez said at a Thursday news conference.

“I unfortunately get to know personally how these nine families have felt … with just a sense of disbelief. With a hope that your loved one is still gonna come home. And knowing that’s just never going to happen again,” he said. “It has been painstaking and heartbreaking.”

Light rail operator Taptejdeep Singh moved from India to the U.S. with his father and uncles over 20 years ago, The Hindustan Times reported.

He leaves behind his wife, his parents and his two children ages 8 and 2, according to The Hindustan Times.