SAN ANTONIO (KTSA News) — A San Marcos police officer was critically hurt in a crash on Interstate 35 over the weekend.

Police say dispatch got a call about debris sitting in the northbound lanes of the interstate near the 202 mile marker at around 9:40 p.m. Saturday.

Officer Claudia Cormier was sent to the scene.

Police say she was struck by a 2000 Ford Expedition driven by 58-year-old Neil Sheehan of Flower Mound.

Cormier was taken to a hospital in Kyle for surgery and was last listed in stable condition with more surgeries expected.

Texas Department of Public Safety troopers arrested Sheehan for Intoxication Assault on a Public Servant — which is a second degree felony — and failure to slow causing serious bodily injury.

A warrant had been obtained for Sheehan’s blood and results are pending.

Firebombs And Terrorism Get A Free Pass From America’s Democrats 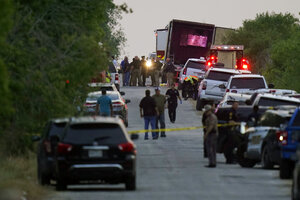