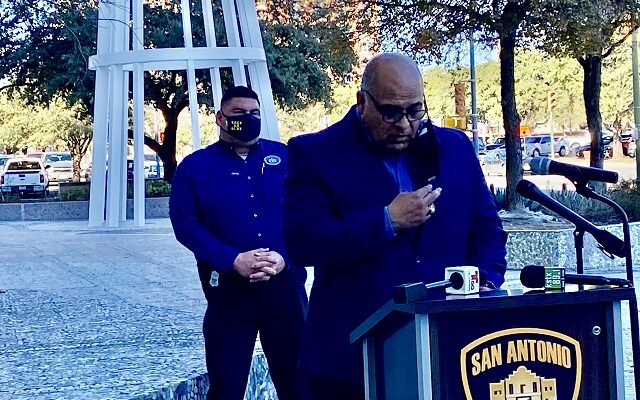 SAN ANTONIO (KTSA News) – In a rare show of unity between the San Antonio Police Officers Association and SAPD Chief William McManus, the two joined forces in denouncing a petition drive by a police reform group.

Fix SAPD is collecting petition signatures in an effort to put two issues on the May ballot that would let voters decide whether to take away SAPOA’s collective bargaining rights.

SAPOA President-elect John “Danny” Diaz accused the group of lying to voters and claiming to be from the San Antonio Police Department with the support of McManus.

“Unfortunately, there’s a group of people trying to divide our city, and they’re doing so by misrepresenting the chief’s statements and lying about the true intentions of their radical anti-police agenda,” said Diaz.   “These out-of-state political operatives are funded by dark money special interest groups.”

“We are not at all saying that we are with SAPD or  SAPOA,” Tomas responded. “I believe people are getting confused because the name is Fix SAPD.”

“I am not opposed to collective bargaining,” McManus said.  He added that the issues he has with the disciplinary process can be resolved at the negotiating table.

Diaz also accused the group of being physically aggressive in their efforts to get signatures on a petition.

“We’ve never been aggressive.  We teach our petitioners to not harass others,” said Tomas.

She acknowledged that the organization has been in contact with out-of-state groups that have similar, but Tomas says most of the funds raised come from within the state of Texas.

“This is a ballot initiative–democracy at its finest. Our goal is to give San Antonio a voice and a choice on repealing these laws,” Tomas said.

At the news conference Monday, McManus expressed his support for Diaz, who replaces longtime SAPOA president Mike Helle.   Detective Helle is retiring after 31 years with SAPD, including 12 years as union president.

“It’s a breath of fresh air coming into a new era, knowing that we will be working together closely with the SAPOA on common goals,” said McManus.