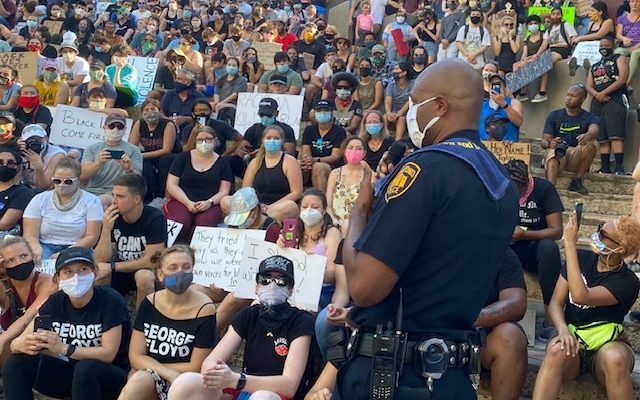 SAN ANTONIO (KTSA News) – Despite the heat advisory and triple-digit real-feel temperatures, hundreds of protesters marched from the Blue Star Arts Complex, through the King William Area to La Villita, the Torch of Friendship and Hemisfair Park Monday afternoon.  It was the tenth day in a row of George Floyd demonstrations in San Antonio.

Officer Douglas Greene, wearing his SAPD uniform, joined the protesters.   The African-American police officer is a well-known spokesman for SAPD, and he told KTSA News that he and those who are participating in the demonstrations want the same thing–peace and love.

“I’m going to be marching with these folks and I’m also going to be doing my job and making sure that they’re safe,” said officer Greene. “That’s just what God called me to do.”

Greene noted that he wasn’t ordered to be there.  He chose to join the protesters.

Greene told the standing-room only crowd at the Arneson River Theatre that his mother was his first authority figure.  She told him to be nice and courteous to people and to respect them.

He also talked about winning the hearts of elementary school children he read to.   They feared him at first and started crying when he walked in wearing his police uniform because they thought he was going to take them away, but he talked to the children and let some of them sit in the front seat of the patrol car with him.  He showed them how the sirens and flashing lights work.

“Before we get to reform policies, we have to work on reforming the heart because there are a lot of people out there who don’t believe their lives matter,” he said.

He was heckled by some in the audience as others tried to hush them, but Greene addressed the hecklers directly.

“I love you.  I’ve got three babies at home, but I’d still put my life on the line for you,” said Greene. “I know you have something to say and I want to listen to you, okay?”

Earlier at the Blue Star Art Complex, the crowd heard from Congressman Joaquin Castro.  He told the protesters he has helped hold off in committee H.R. 1154, the Public Safety Employer-Employee Cooperation Act.

“This bill would have allowed police unions to engage in collective bargaining throughout the country,” said Congressman Castro.  “We  can’t have that right now.”

He handed the bullhorn to his brother, former mayor and ex-HUD secretary Julian Castro.

“I would encourage every San Antonian who cares about these issues to put as much pressure as you possibly can on your city council member and on the police union to change what’s wrong with our system,” said the former Democratic Presidential candidate.

At least one person was overcome by the heat at the Arneson River Theatre.   Paramedics quickly responded and put the young woman in an ambulance.