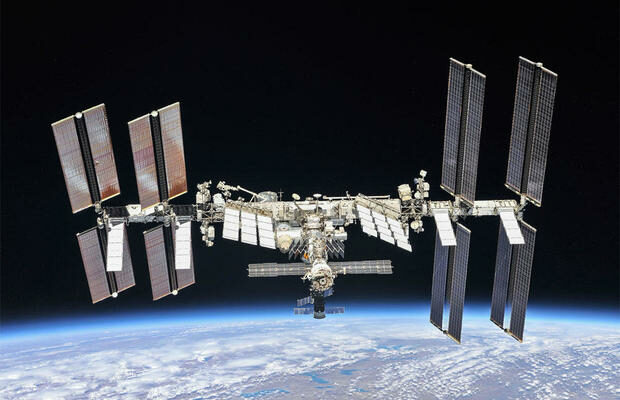 A satellite breakup resulting in a “cloud” of debris prompted the seven-member crew of the International Space Station to seal hatches and take shelter in their Crew Dragon and Soyuz spacecraft early Monday, officials said.

Flight controllers in Houston woke up the crew to inform them of the possible close encounter, or “conjunction.”

“Station on space-to-ground 2 for an early wakeup,” mission control called. “We were recently informed of a satellite breakup and need to have you guys start reviewing the safe haven procedure.”

The crew was told to close hatches between the U.S. and Russian segments and to seal off modules extending radially from the lab’e long axis, which includes the European Space Agency’s Columbus module, Japan’s Kibo, the U.S. Quest airlock and NASA’s Tranquility module.

“Because of the nature of the satellite breakup, we expect that we would see this risk every 90 minutes,” mission control radioed. “And while the teams on the ground are analyzing the situation, we expect we could be staying in the config with the radial hatches closed for up to a day.”

After sheltering in their respective spacecraft during the initial close approach period, the crew members were cleared to return to the station’s interior and re-open hatches between the U.S. and Russian segments. The U.S. crew was allowed to briefly open side-hatches as needed between possible encounters.

“Friends, everything is regular with us!” station commander Anton Shkaplerov reassured the ground in a tweet.

The Russian space agency Roscosmos tweeted the orbit of the debris was no longer a concern, but it wasn’t clear whether additional encounters remained a concern.

The origin of the debris is not yet confirmed, but U.K.-based Seradata, which operates the commercial SpaceTrak satellite database, reported the breakup may have involved Cosmos 1408, a long-retired Russian electronic eavesdropping spacecraft in polar orbit.

The company tweeted that a Russian anti-satellite test may have been conducted, although that could not be immediately confirmed.

“ASAT missile strike now suspected,” the company tweeted. “Seradata SpaceTrak database orbital data had Cosmos 1408 in a 487 x 461 km orbit — a bit higher than ISS but not much. The ASAT strike on Cosmos 1408 would cause some debris to be fired below it … threatening ISS with a crossing debris cloud.”

In an email, Air Force Major Annmarie Annicelli said U.S. Space Command “is aware of a debris-generating event in outer space. We are actively working to characterize the debris field and will continue to ensure all space-faring nations have the information necessary to maneuver satellites if impacted.”

She said Space Command is working with the State Department and NASA concerning the reports “and will provide an update in the near future.”

Depending on how close to the lab a piece of debris is predicted to pass, the crew can be asked to take shelter in their respective spacecraft, ready to make a quick return-to-Earth in case of an impact.