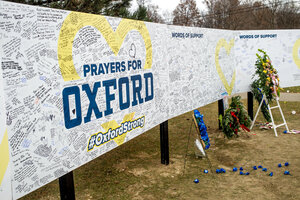 Two lawsuits seeking $100 million each have been filed against a Michigan school district, its superintendent, principal and others after four students were fatally shot and others wounded at Oxford High School, a lawyer announced Thursday.

The lawsuits were filed in federal court in Detroit, attorney Geoffrey Fieger said Thursday. They were filed on behalf of a student who was shot in the neck and wounded during the Nov. 30 shooting and her sister, who was next to her at the time of the shooting.

The Associated Press sent an email Thursday seeking comment from the district.

Ten students and a teacher were shot at the school in Oxford Township, roughly 30 miles (50 kilometers) north of Detroit.

Ethan Crumbley, a 15-year-old sophomore at the school, was arrested at the school and has been charged as an adult with murder, terrorism and other crimes. His parents, James and Jennifer Crumbley, later were arrested and charged with involuntary manslaughter.

Personal-injury lawyers have expressed doubt that the school district could be successfully sued for letting Crumbley stay in school. That’s because Michigan law sets a high bar to wring liability out of public schools and other arms of government.

“You have to show that the administration or faculty members were grossly negligent, meaning they had a reckless disregard for whether an injury was likely to take place,” said attorney A. Vince Colella.