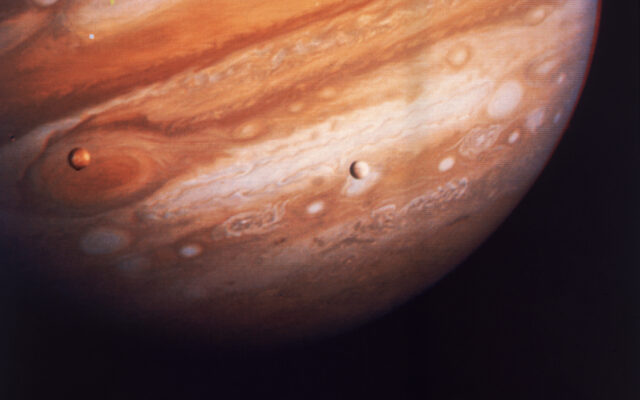 Jupiter, the largest planet in our solar system, with two of its satellites, Io on the left (above Jupiter's Great Red Spot) and Europa on the right, March 1979. The image was taken by the Voyager 1 spacecraft. (Photo by Space Frontiers/Hulton Archive/Getty Images)
Now’s your chance to name a moon, but don’t get your hopes up — Moony McMoonFace is not in the running. Researchers at the Carnegie Institution for Science have implemented some pretty strict rules for their contest asking for the public’s help in naming Jupiter’s newly discovered moons.

Carnegie scientists first announced the accidental discovery of 12 moons orbiting Jupiter in July 2018. A team of astronomers was looking for a possible “Planet X” or “Planet 9” beyond the orbit of Pluto when the moons were found. Carnegie’s Scott Sheppard said 11 of the outer moons are “normal,” but one is an “oddball.” The discovery brought Jupiter’s total number of moons to 79 — the most of any planet in our Solar System. Its largest and most famous moons are named Io, Europa, Ganymede and Callisto.

Now, the researchers are asking for help naming five of the 12 moons, but there are some strict guidelines in order to be approved by the International Astronomical Union. The names must be 16 characters or less, cannot be offensive and cannot be too similar to the names of existing moons or asteroids. The moons cannot be named after a living person or anything connoting political, military or religious actives.

There are even more rules. The moons must be named after characters in Roman or Greek mythology who were either descendants of or lovers of Jupiter (Roman) or Zeus (Greek). They both had quite a lot of lovers and descendants, so there are plenty of names to choose from.

Three of the moons are retrograde, meaning they orbit in the opposite direction of the gas giant’s rotation. These moons must have names ending in the letter “e.” The two moons in a prograde orbit must have names ending in the letter “a.” One of the moons is an “oddball” because it orbits among the retrograde moons — but in a prograde direction. The unusual moon has already been named Valetudo.

If you have a name idea, you can suggest it to the account @JupiterLunacy on Twitter, explaining why the name was picked with a tweet or a short video along with the hashtag #NameJupitersMoons. The contest ends April 15, 2019.