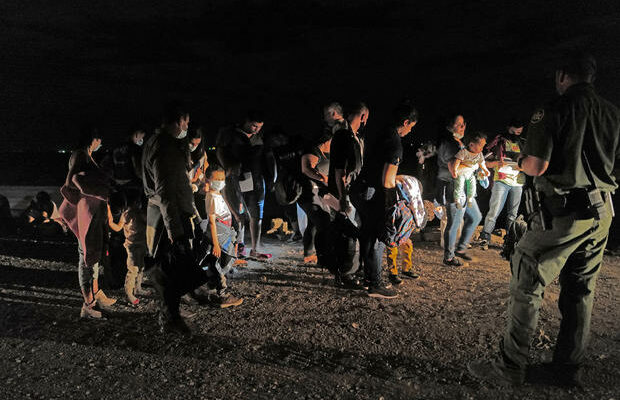 Migrants attempting to cross in to the U.S. from Mexico are detained by U.S. Customs and Border Protection at the border August 15, 2021 in San Luis, Arizona. Getty Images

The Supreme Court issued an order late Tuesday declining to stop the revival of a Trump-era border policy that requires asylum-seekers to wait in Mexico while their cases are reviewed by U.S. immigration judges.

Since the current hold on the lower court judge’s ruling expires at midnight on Tuesday, the Biden administration will be legally mandated to implement the Trump-era border rule on Wednesday.

Justices Elena Kagan, Sonia Sotomayor and Stephen Breyer, who make up the Supreme Court’s liberal minority, indicated they would have granted the Biden administration’s request.

Tuesday’s ruling is a significant judicial setback for the Biden administration, which has maintained it can’t implement the Remain-in-Mexico policy without the Mexican government agreeing to accept migrants returned by the U.S.

Last week, the Mexican foreign ministry called the potential revival of Remain-in-Mexico a “unilateral” U.S. action, saying it had yet to be officially notified of a policy change.

U.S. immigration officials were directed late Tuesday to “reimplement” Remain-in-Mexico starting at 12:01 AM on Wednesday, according to an internal Department of Homeland Security memo obtained by CBS News.

The memo from Andrew Davidson, the U.S. asylum chief, noted that DHS is working on an “expeditious” revival of the policy, but said that it hinges on Mexico’s “concurrence,” as well as “the establishment of appropriate infrastructure, processes, and related systems and capabilities.”

U.S. officials were also instructed to stop processing and admitting asylum-seekers who were previously subjected to the Remain-in-Mexico rules. As of earlier this summer, the Biden administration had allowed 13,000 of these asylum-seekers to enter the U.S. and continue their cases there.

“Once necessary prerequisites are met,” the U.S. will start returning migrants to Mexico, the memo said.

In a statement, the Department of Homeland Security said it was holding “diplomatic discussions” with the Mexican government about the Remain-in-Mexico rule, which the Trump administration dubbed the Migrant Protection Protocols, or MPP.

“The Department of Homeland Security respectfully disagrees with the district court’s decision and regrets that the Supreme Court declined to issue a stay,” the department said. “DHS has appealed the district court’s order and will continue to vigorously challenge it.  As the appeal process continues, however, DHS will comply with the order in good faith.”

During former President Donald Trump’s term, more than 70,000 Latin American migrants were enrolled in MPP and returned to Mexico, where many found themselves in squalid tent camps and dangerous border towns. Advocates for asylum-seekers strongly denounced the policy, calling it inhumane and draconian.

President Biden, who was critical of the program during the 2020 presidential campaign, suspended it on his first day in office. Homeland Security Secretary Alejandro Mayorkas formally terminated the program in June.

Despite its draw down of the MPP policy, the Biden administration has continued to cite a public health law that was first invoked by the Trump administration in March 2020 to rapidly expel from the U.S. southern border most migrant adults and some families with children without allowing them to request asylum.

At the center of the current court case over the MPP program is a lawsuit filed by Texas and Missouri, which alleged that the Biden administration illegally terminated the program.

Earlier this month, U.S. District Judge Matthew Kacsmaryk, who was appointed to the federal bench by former President Trump, agreed with the arguments presented by Texas and Missouri, finding that the Biden administration’s rescission of the MPP policy was unlawful.

Kacsmaryk ordered federal officials to revive the Remain in Mexico program until it is “lawfully rescinded” and the government has the detention capacity to hold all asylum-seekers and migrants subject to mandatory detention.

In its opinion last week, the Fifth Circuit noted that if the Biden administration’s “good-faith efforts to implement MPP are thwarted by Mexico, it nonetheless will be in compliance with the district court’s order, so long as it also adheres to the rest of the statutory requirements.”

On Tuesday, the Supreme Court said its order should “not be read as affecting” the Fifth Circuit’s interpretation of Kacsmaryk’s original ruling.

Omar Jadwat, the director of American Civil Liberties Union’s immigrants rights project, urged the Biden administration to move swiftly to try to wind down the Remain-in-Mexico rule once again.

“The government must take all steps available to fully end this illegal program, including by re-terminating it with a fuller explanation,” Jadwat said. “What it must not do is use this decision as cover for abandoning its commitment to restore a fair asylum system.”