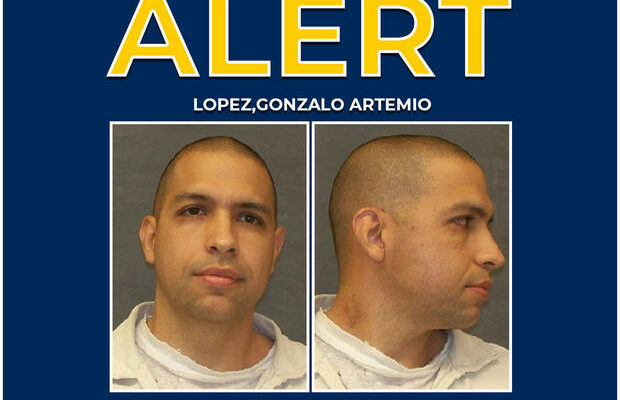 Texas officials are searching for inmate Gonzalo Lopez who escaped after stabbing a prison bus driver.   Texas Department of Criminal Justice via Facebook.
Authorities in Texas are on the hunt for an inmate serving a life sentence for murder who escaped from a transport bus after stabbing the driver.

Gonzalo Lopez, 46, escaped custody Thursday after he got out of his restraints and overpowered the driver of a bus carrying 16 prisoners, officials said.  Lopez allegedly stabbed the driver in the left hand with an unknown object, causing the driver to pull over in Centerville, Texas.

Lopez fled the scene on foot while another officer on the bus fired his service weapon at him. Officials said they do not know if any of the shots fired hit Lopez.

No other prisoners escaped in the incident, officials said.

Both officers and the inmates were evaluated at the scene. No one involved has any life-threatening injuries, officials said Thursday.

The last time officers saw Lopez, who was convicted in 2006 of capital murder, was in a cow pasture west of Centerville, the state criminal justice department said.

Students and staff at Centerville Independent School District were under a precautionary lockdown Thursday because of the incident. Students were eventually able to return home later in the afternoon and the school district canceled all classes Friday.

The Texas Department of Criminal Justice canceled visitation Friday for several units due to the ongoing manhunt for Lopez.

The Leon County Sheriff’s Office is urging residents to lock the doors of their homes and vehicles while multiple agencies collaborate on the search for Lopez. If spotted, people are encouraged not to approach him and to immediately contact 911. A $15,000 reward is being offered for information leading to his capture.