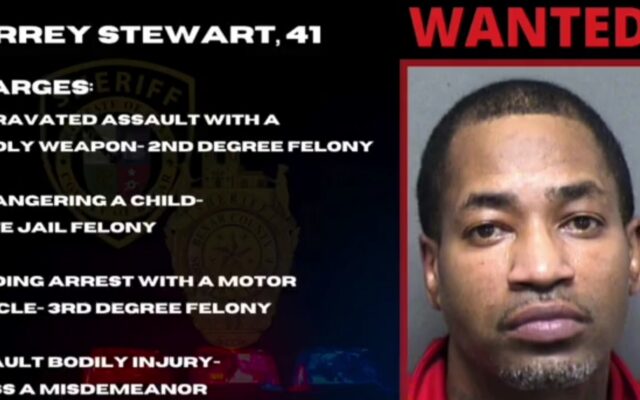 SAN ANTONIO (KTSA News) — The search continues for a man who led Bexar County Deputies on a chase after assaulting two people and taking a child.

Sheriff Javier Salazar says it started Tuesday afternoon when 40 year old Torrey Stewart showed up at the home of a former girlfriend, who is also the mother of his child.

“He came to that residence on Climbing Vine and he began to assault the woman. A male victim then tried to intervene physically. The two men became involved in a violent struggle.”

Stewart hit the man several times with a gun before it fired one time. Nobody was shot . Stewart then grabbed the child and fled.

Deputies eventually caught up to him on Wurzbach Road where he jumped out of the car and ran away.
A deputy did manage to fire his taser at Stewart but it didn’t stop him.

He’s still on the loose. The child was not hurt during the chase.

Stewart is facing charges of Aggravated Assault with a Deadly Weapon, Endangering a Child, Evading Arrest with a Motor Vehicle and Assault Bodily Injury.