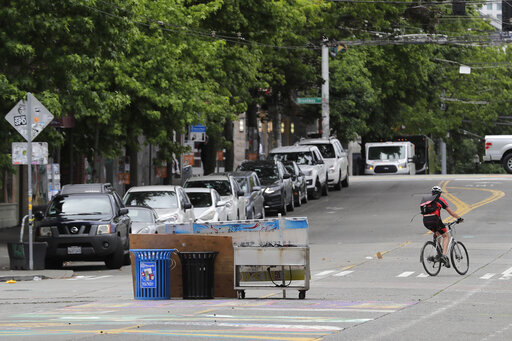 A cyclist rides past what remains of makeshift barricades that were put in place by protesters at the intersection of 10th Ave. and Pine St., Tuesday, June 30, 2020 after Seattle Department of Transportation workers removed concrete barricades from the intersection at the CHOP (Capitol Hill Occupied Protest) zone in Seattle. The area has been occupied by protesters since Seattle Police pulled back from their East Precinct building following violent clashes with demonstrators earlier in the month. (AP Photo/Ted S. Warren)

Demonstrators dragged couches and other items to replace the structures. But those were largely gone later in the day.

People have occupied several blocks around a park and the Seattle Police Department’s East Precinct for about two weeks after police abandoned the building following standoffs and clashes with protesters calling for racial justice and an end to police brutality.

Seattle police Assistant Chief Adrian Diaz said the large, makeshift barriers would be removed in steps to allow traffic to move through portions of a road that had been closed off.

Cement barricades that remained in front of the Seattle Police Department East Precinct building Tuesday were fortified by protesters with chunks of concrete and tarps.