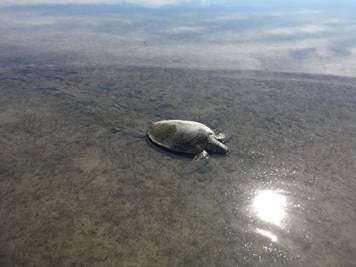 The turtles were on the Upper Laguna Madre in Corpus Christi where the water temperature dropped to the point that the turtles were suffering from hypothermia and weren’t able to swim.

When that happens there is the added danger of getting hit by boats are attacked by predators.

In an effort to help the turtles survive, members of SeaWorld San Antonio’s rescue team were sent to the coast to gather them up.

They brought 13 of them to the Division of Sea Turtle Science and Recovery at Padre Island National Seashore.

The turtles will be returned to the coast once the water temperature is warm enough for them.

SeaWorld’s rescue crews have saved the lives of thousands of animals. Dolphins, turtles and manatees. But their rescues aren’t limited to aquatic life. They’ve been sent out to help several land roving creatures as well.

If you want to learn more about the rescues and the people who perform them, head to the park this weekend during SeaWorld’s final “Wild Days” weekend.