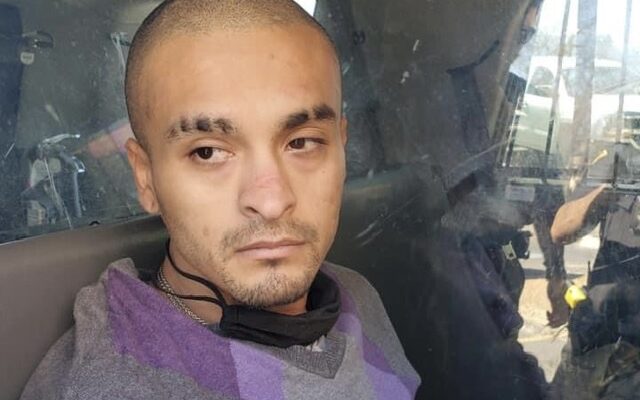 SAN ANTONIO (KTSA News) – “Well, we got him,” Bexar County Sheriff Javier Salazar declared after deputies arrested the second suspect in the shooting of a Balcones Heights police sergeant.

Wilifredo Montemayor, who’s believed to be the trigger man, was taken into custody Saturday at a Northeast Side apartment complex on Perrin Beitel Road near Loop 410. An undercover officer spotted Montemayor walking at the complex with a beanie pulled down over his eyebrows and a mask. Salazar says the undercover officer “exchanged pleasantries” with Montemayor and gave him the peace sign.

“He basically shot him the deuce,” Salazar said.

The officer identified him to deputies as Montemayor before uniformed  Bexar County SWAT officers moved in and arrested him. The sheriff said Montemayor was carrying a handgun and methamphetamine in a fanny pack.

Wilifredo Montemayor is accused of shooting Balcones Heights Police Sgt. Joey Sepulveda Wednesday afternoon after the officer stopped the truck his brother was driving. Sijifredo Montemayor was captured in Mexico and brought back to Bexar County Friday.

Salazar told reporters that Wilifredo is being cooperative with investigators and is providing “pretty chilling” details about the shooting.

“It would literally chill your blood to hear the lack of emotion as he detailed his actions on that day,” said Salazar.

The brothers are charged with attempted capital murder.