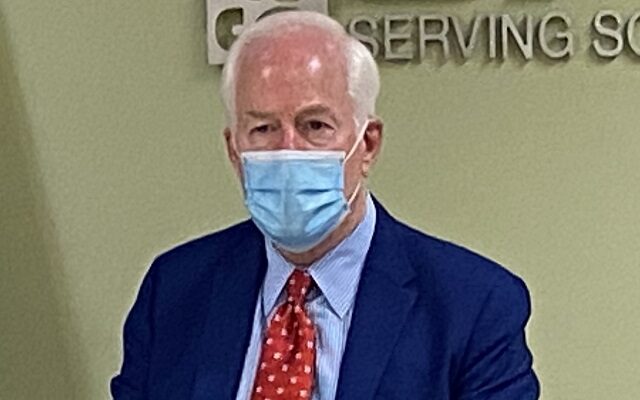 SAN ANTONIO (KTSA News) – Sen. John Cornyn  is calling on the Senate Judiciary Committee to hold a hearing on the border crisis.

During a visit to the San Antonio Food Bank Thursday, the Republican from Texas noted that most  members of congress haven’t visited the southern border to get a first-hand look at the problems.

“I think it’s really important to help inform all the members of  Congress.  The best way to do that, other than an in-person visit, is through holding hearings and inviting people on both sides of the argument to come in and make their case,” said Cornyn.

He talked about the need to bring members of both parties together to come up with solutions.

Cornyn and Grassley wrote a letter to Senate Judiciary Chairman Dick Durbin suggesting that Homeland Security Secretary Alejandro Mayorkas and the leaders of various agencies working along the southern border be called to testify.  Cornyn told reporters in San Antonio Thursday that he would invite the Border Patrol chief, who has been the senator’s “primary instructor on matters related to the border.”

While some members of congress believe investing in Central American countries and helping them fight the violence and other problems that are driving people to seek asylum in the United States, Cornyn believes that’s only part of the solution.

“Our record of nation-building has not been good and we can’t do something for them that they don’t want to do for themselves,” said Cornyn. “We can help them, but we can’t do it for them.”

He also noted that the migrants aren’t coming solely from Central America.

“When I was in the Del Rio sector a couple of weeks ago, you may be surprised to learn that the border patrol chief said that they had detained people from 54 different countries, so this isn’t just strictly a Central American phenomenon or a Mexican phenomenon.  These are global criminal organizations that smuggle people and drugs for money,” said Cornyn.

The senator predicts the situation will get much worse with the number of asylum seekers continuing to grow during the spring and summer months.