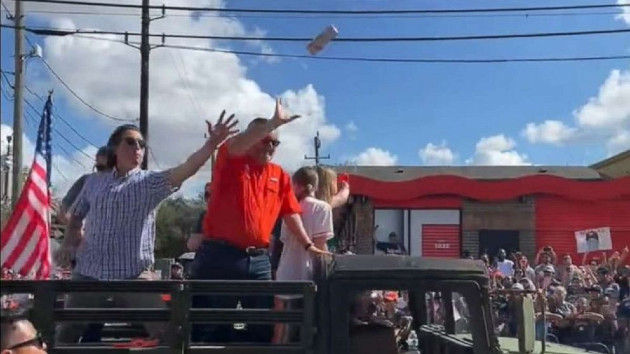 (HOUSTON) — The 2022 World Series-winning Houston Astros are widely regarded to have one of the best pitching rotations in Major League Baseball this season but it was a beer can pitched at Texas Sen. Ted Cruz by one of their fans that may end up being the most controversial.

The incident occurred during the World Series victory parade on Monday afternoon as tens of thousands of Houston Astros fans lined Smith Street in downtown Houston to celebrate the newly-crowned champions. Cruz, who was riding on the back of a Humvee while waving to the gathered crowds, was struck by a beer can as he drove along the parade route, according to the Houston Police Department.

“A male, 33, threw a beer can at U.S. Senator Ted Cruz as the Senator was on a float in the 2400 block of Smith St,” the Houston Police Department confirmed in a statement on social media following the incident. “Nearby HPD officers arrested the male without further incident.”

The Houston Police Department said that Cruz was struck in the head and neck area and did not require medical attention after being struck.

Cruz, who was showered by boos — along with other politicians — from the crowd as he drove by, tweeted a video of the incident accompanied by a statement addressing the assault.

“As always I’m thankful for the Houston Police and Capitol Police for their quick action,” said Cruz. “I’m also thankful that the clown who threw his White Claw had a noodle for an arm.”

As always I’m thankful for the Houston Police and Capitol Police for their quick action.

I’m also thankful that the clown who threw his White Claw had a noodle for an arm. https://t.co/CRSfNHckA2

The 33-year-old suspect was apprehended immediately after allegedly lobbing the can at Cruz and was taken to jail where he will faces assault charges, according to the Houston Police Department. His name and booking photo will be released once formal charges have been filed.

Cruz was not the only politician taking part in the Astros victory parade. U.S. Representatives Sylvia Garcia and Lizzie Fletcher were also riding on the Humvee with the senator and Texas Lt. Gov. Dan Patrick was in a vehicle ahead of them while U.S. Representative Sheila Jackson Lee was in the vehicle behind the one Cruz was riding on.

The Houston Astros won the 2022 World Series at home at Minute Maid Park on Saturday night after defeating the visiting Philadelphia Phillies 4-1 in Game 6 and won the World Series four games to two. It is their second World Series title in six years and first since 2017.