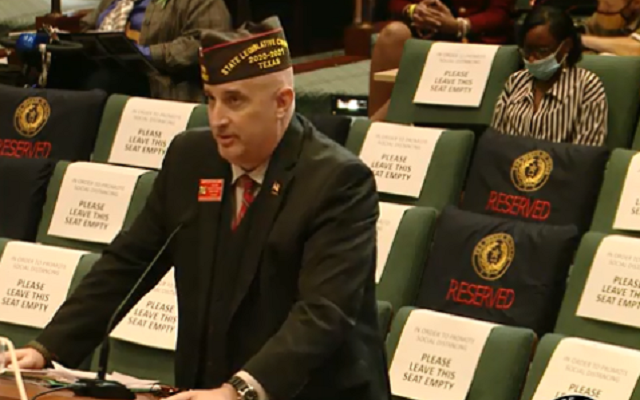 SAN ANTONIO (KTSA News) – Some Texas Senators joined in when a crowd  burst into song during a hearing on the “Star Spangled Banner Protection Act” Friday afternoon.

The Senate State Affairs Committee held a hearing on the bill which would require professional sports teams in Texas that receive financial support from the state or other governmental entity to play the national anthem before their home games.

“This bill does not require anyone to stand for the national anthem,” said Sen. Dawn Buckingham, sponsor of the bill.

The measure was filed after it came to light that the  Dallas Mavericks did not play the national anthem for 12 games.  The NBA has since issued a directive requiring all teams to play the Star Spangled Banner.

Mitch Fuller with Texas Veterans of Foreign Wars testified in support of the bill.

“It does not infringe on anyone’s individual rights and it’s important for our country that we have this,” said Fuller. “Baseball games, basketball games, hockey games are civic gatherings and we think the national anthem should be played.”

But one of the critics told the committee that the measure smacks of McCarthyism.  Another opponent said the State shouldn’t pressure teams to show their patriotism.