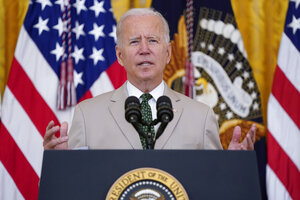 President Joe Biden speaks about the July jobs report during an event in the East Room of the White House, Friday, Aug. 6, 2021, in Washington. (AP Photo/Evan Vucci)

WASHINGTON (AP) — Senate Democrats across the political spectrum seem near the unanimity they’ll need for the crucial first step toward their $3.5 trillion vision of bolstering health care, education, family services and environment programs

From Democratic socialist Bernie Sanders on the left to moderate Joe Manchin on the right, numerous Democratic senators have said they’ll support a budget resolution outlining the ambitious domestic goals they share with President Joe Biden. None have said they’ll oppose the budget measure, which the Senate seems likely to approve after its expected passage of a smaller, bipartisan infrastructure package as soon as Saturday.

The backing of every Democrat in the 50-50 Senate, plus the tie-breaking vote of Vice President Kamala Harris, will be needed to approve the budget over likely solid Republican opposition. Its passage must occur before lawmakers can write the huge follow-up bill, probably this fall, that would carry their specific spending and tax plans through the narrowly divided Congress.

Progressives are passionate about the $3.5 trillion social and environmental package. Moderates strongly back the separate $1 trillion measure financing highway, water and other i nfrastructure projects.

Democrats of all stripes know that rejecting the budget would mark a quick derailment of Biden’s defining domestic priorities, a stunning, self-inflicted political blow. Their broad support for the fiscal blueprint underscores that each of the party’s two competing wings knows it needs the other’s backing to enact its top priority.

Asked if his party’s factions faced the political version of “mutually assured destruction,” liberal Sen. Sheldon Whitehouse of Rhode Island, said, “I think it’s a mutually assured improvement situation for the American people, if we can pull it off.” The Cold War tenet helped prevent the U.S. and the U.S.S.R. from launching nuclear weapons at each other.

The Democrats’ rallying behind the budget also illustrates another calculation: They know the battle that counts most will come in autumn.

That’s when, with almost no margin for error, they’ll try translating the budget’s broad guidelines into the expansive, $3.5 trillion, 10-year package of specific spending and tax provisions. Besides the evenly divided Senate, Democrats narrowly running the 435-member House will be able to lose no more than three votes to prevail.

Significantly, budget passage would let Democrats move that huge follow-up bill through the Senate by a simple majority, circumventing a Republican filibuster that would require 60 votes to overcome. The budget itself cannot be filibustered.

It’s unclear when the House will take up the budget.

Sanders, I-Vt., chairman of the Senate Budget Committee, this week made the progressives’ case for the budget blueprint he helped craft.

He said it was time to help working- and middle-class people, “needs that have been neglected for decades.” He said the measure’s initiatives would be paid for by ending the “obscenity” of allowing some rich people to escape paying federal income tax, boosting levies on the wealthy and on big corporations.

He mocked space-traveling billionaires Jeff Bezos and Richard Branson without naming them, saying they seem “increasingly unconcerned about what happens here on Earth because they’re off in outer space.”

And in what seemed a plea for pragmatism by his fellow progressives, Sanders acknowledged that the measure falls short of some of his personal goals but would be “a major step forward.”

Sanders has said his budget’s proposals will include an extension of the recently expanded child tax credit; free pre-kindergarten and community college; new dental, eye and hearing benefits under Medicare; bolstered housing and home health care and efforts to fight climate change by encouraging clean energy.

“No one’s going to get everything they want,” she said this week. “But we Democrats are all rowing in the same direction.”

From the opposite end of the party’s spectrum, the centrist Manchin said that “out of respect for my colleagues” he will vote for the budget. Also flashing a green light — for now — is Sen. Kyrsten Sinema of Arizona, a moderate who helped write the bipartisan infrastructure compromise.

“While I support beginning this process, I do not support a bill that costs $3.5 trillion,” she said. Her statement suggested she’d back the budget and was leaving herself flexibility to fight later about spending amounts.

“This starts the process,” said Sen. Mark Warner of Virginia, a moderate who helped craft the bipartisan infrastructure bill and is an influential voice on Sanders’ Budget Committee. While he said he had no guarantees about how moderates would vote on the budget, Warner said hopes that the U.S. might curb the pandemic make it time for “a fresh debate about what the social contract ought to look like in this country.”

Even so, signs of a fall clash between moderate and progressive Democrats’ priorities are unmistakable.

Manchin, whose West Virginia home state relies heavily on energy production and mining, says he isn’t “making any promises” about whether he’ll back the $3.5 trillion spending bill this fall. He pointedly notes that that legislation’s climate change provisions — a top progressive priority — would have to move through the Senate Energy and Natural Resources Committee, which he chairs.

From across the party’s ideological divide, Rep. Alexandria Ocasio-Cortez, D-N.Y., says there will be “more than enough” progressive votes to block the current infrastructure bill in the House until liberals get the investments they want in the separate $3.5 trillion package.

Ocasio-Cortez spoke last weekend on CNN’s “State of the Union.”