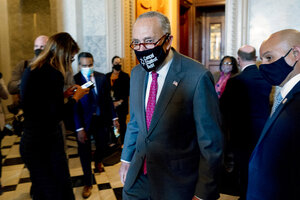 The Senate passed the resolution on a party line vote of 50-49. The measure serves as the blueprint for President Biden’s social spending agenda, and will include funds to combat climate change, establish child care programs, expand Medicare and provide a pathway to citizenship for undocumented immigrants.

“The Democratic budget will bring a generational transformation to how our economy works for average Americans,” Senate Majority Leader Chuck Schumer said after the vote.

The budget resolution represents the second track of a two-track system to pass infrastructure spending that was outlined by Schumer. He was adamant that the Senate pass both the bipartisan bill and a budget resolution before lawmakers left Washington for their August recess.

The resolution now heads to the House, where House Majority Leader Steny Hoyer has told colleagues that the chamber will return from recess the week of August 23 to consider the budget resolution.

House Speaker Nancy Pelosi has said the lower chamber will not consider the bipartisan infrastructure bill until the Senate passes the larger package, a process that could take several months. Pelosi added Tuesday that she was glad that the bipartisan bill passed the Senate, but noted the infrastructure bill is “not the totality of the vision of Joe Biden and the congressional Democrats.” The Senate passed the $1 trillion bill in a 69-30 vote earlier Tuesday.

Mr. Biden expressed optimism that both measures would eventually reach his desk, saying Tuesday that he expects Democrats to remain united behind the $3.5 trillion plan as well as the $1 trillion plan.

The budget resolution provides instructions to committees to draft legislation that can pass using a process known as reconciliation, which allows Democrats to pass the package with a simple majority. No Republicans are expected to support the budget reconciliation package.

Before the Senate voted to pass the budget resolution, the Senate held a series of votes on amendments in a process known as a “vote-a-rama,” in which senators offered non-binding changes to apply political pressure on their colleagues. Senators cast votes over more than 14 hours, on 47 amendments before voting on the $3.5 trillion resolution.

In a letter to colleagues on Monday, Schumer said he and Senator Bernie Sanders of Vermont, who is the chair of the Senate Budget Committee, have been in contact with Pelosi and House Budget Committee chair John Yarmuth on developing the budget. Schumer’s letter also notes that the budget resolution sets September 15th as the date for committees to submit the legislation for the caucus to review.