Senate prepares to move on bill to prevent government shutdown 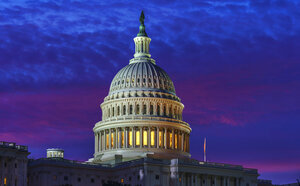 ▶ Watch Video: President Biden cancels planned trip to focus on infrastructure talks as government shutdown looms
Washington — The Senate on Wednesday is preparing to take up a short-term government funding bill that keeps federal agencies operating through December 3, but leaves unaddressed the looming deadline for when the U.S. is projected to exhaust its borrowing authority.

Senate Democrats are moving toward passing the stopgap bill two days after GOP senators blocked a funding measure that both averted a government shutdown and suspended the debt limit. Any proposal addressing the latter has been a non-starter for Republicans, who have warned that Democrats have to hike the debt limit without relying on their support.

Known as a “clean” continuing resolution, the measure maintains current funding levels through December 3 and includes $6.3 billion for relocation efforts for Afghan refugees, as well as $28.6 billion for disaster assistance following a spate of devastating hurricanes and wildfires.

Senate Democrats were gauging support on Tuesday evening for quickly passing the continuing resolution through unanimous consent, a source familiar with the matter told CBS News. Passing it via unanimous consent would not require a formal vote, but a single senator could object and derail the process.

If passed by the Senate, the stopgap funding bill would head to the House, where its passage would stave off at least one fiscal crisis facing the Democratic-controlled Congress. Government funding is set to run out end-of-day Thursday, and a lapse in funding would trigger a partial government shutdown while federal agencies continue efforts to respond to the COVID-19 pandemic.

House Majority Leader Steny Hoyer told reporters on Tuesday that the House could vote Wednesday on a clean continuing resolution, as well as a separate measure suspending the debt ceiling. “We’ll see what the Senate sends us,” Hoyer said. “They’re trying to send us something.” Minority Leader Mitch McConnell has said Republicans would support a clean government funding bill to avoid a shutdown.

White House press secretary Jen Psaki told reporters Monday that a “great deal of public health” would be exempted from a shutdown, but said “that doesn’t change the fact that having services shut down, staffing cut in different agencies is not in the interests of addressing any crisis we face, including the pandemic.”

Still, the White House last week issued guidance to federal agencies to begin planning for a lapse in funding.

Keeping the government operating is not the only legislative must-do for Congress, as lawmakers are staring down a debt crisis absent action to raise the debt ceiling. Treasury Secretary Janet Yellen told congressional leaders in a letter Tuesday that the U.S. would exhaust extraordinary measures allowing the government to pay its bills on October 18, and a failure by lawmakers to hike the debt limit would send the nation into default for the first time in its history.

Alongside efforts to forestall a government shutdown and raise the debt ceiling, Democratic leaders are looking to make progress this week on two key aspects of President Biden’s domestic policy agenda: a $1 trillion bipartisan infrastructure bill and a $3.5 trillion package that would strengthen social programs and overhaul major portions of the economy.

While the House is slated to vote on the infrastructure plan Thursday, it’s unclear whether it will pass, as progressive lawmakers have threatened to tank the bill. They want the Senate to vote first on the $3.5 trillion proposal, though there are objections to the bill’s price tag from a pair of Senate Democrats, whose support is needed in order for the sweeping package to pass.