He tells KTSA’s Trey Ware he’s meeting with officials to talk about the growing number of people crossing the border illegally.

“In the month of May, we apprehended over 144,000 people crossing illegally. That’s in one month.”

He placed blame on Senate Democrats for blocking any real efforts to close loopholes and solve the problem.

He says he watched last weeks Democratic Presidential candidates debates and for him, they offered no solutions.

“You saw a bunch of the Democratic candidates talk about abolishing the criminal penalty for crossing the border illegally. Their solution is, 144,000 people cross here illegally, well voila, we’ll just make it not a crime…problem solved. That is the definition of open borders and it’s irresponsible.”

Cruz says these are not real policy solutions and that it’s all about politics.

“This is about their base, hates Donald Trump and all of this, open border, free health care for everyone is all driven by their hate for Donald Trump.”

During his visit, Cruz will visit a processing center, a detention facility and do a flyover of the areas that are seeing the highest numbers of illegal crossings. 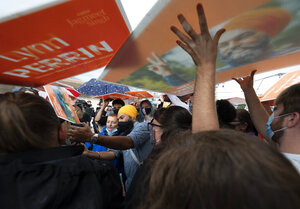 Canada votes in pandemic election that could cost Trudeau