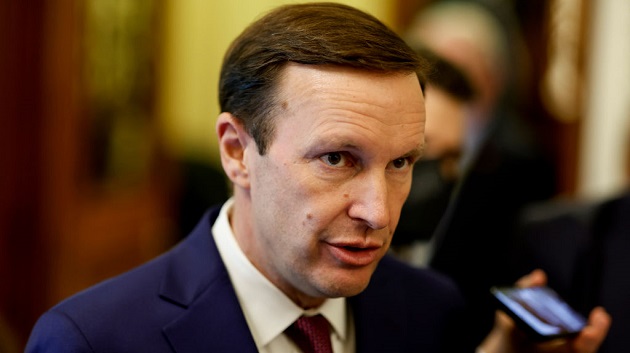 WASHINGTON, DC - JUNE 14: Sen. Chris Murphy (D-CT) speaks with reporters following a news conference after a policy luncheon with Senate Democrats in the U.S. Capitol Building on June 14, 2022 in Washington, DC. At the news conference Senate Majority Leader Chuck Schumer (D-NY) gave an update on the negotiations for the framework of the bipartisan gun reform legislation. (Photo by Anna Moneymaker/Getty Images)

(WASHINGTON) — Connecticut Sen. Chris Murphy, the top Democratic negotiator on a pending package to address gun violence, told reporters on Tuesday afternoon that a deal had been reached on the legislative text — and that the bill will be out soon.

“We have an agreement and the text will be coming out very shortly,” Murphy said before walking onto the Senate floor to preside.

Murphy declined to give more specific timing on when the draft bill would be introduced ahead of what leaders have signaled would be a quick vote.

A bipartisan group of senators has been working for days behind the scenes to turn a previously announced legislative framework into a specific bill that retains enough Republican support to avoid a filibuster.

Democratic leadership, including Illinois Sen. Dick Durbin, have been clear they need bill text by Tuesday to get to a vote before the July 4 recess.

Sources previously told ABC News that abortion funding had emerged as the latest snag in the Senate’s talks to finalize the legislative agreement, with the informal deadline looming at the end of Tuesday in order to keep a potential bill on track for a vote before the two-week holiday break.

Negotiators had recently been focusing on the Hyde Amendment, which forbids federal funding from being used to pay for abortions. That provision got caught up in the portion of the possible gun law dealing with mental health funding, with Republicans pushing for language barring any money in an ultimate agreement from being used pay for abortions, according to a source familiar with the matter.

That snag marked the latest curveball in the discussions.

Sen. John Cornyn of Texas, the lead Republican working on the deal, expressed optimism to ABC News earlier on Tuesday that an agreement could be reached later that day, saying that draft text would emerge “hopefully shortly.”

Still, Cornyn said — without elaborating — that certain “details” needed to be worked out.

“It’s a complicated bill and it’s been a tough negotiation,” he said.

The other core negotiators have been Sens. Murphy, Kyrsten Sinema (D-Ariz.) and Thom Tillis (R-N.C.).

The gun talks recently narrowed in on two other disagreements: funding for “red flag” laws, which would allow law enforcement to remove firearms from those deemed a danger to themselves or others, and how extensively to address the “boyfriend loophole” by expanding the kinds of domestic abusers barred from having firearms.

Sen. Durbin, the majority whip, suggested to ABC News on Tuesday that conversations over the Hyde Amendment could be resolved quickly and aides were still optimistic that an overall deal would not be derailed.

Negotiators have been pressing for a bill that can get the filibuster-proof support of 10 Republican senators, the same number who previously supported the framework announced on June 12.

Democrats want a deal to be wrapped up shortly to maintain momentum amid public outcry following high-profile mass shootings in Buffalo, New York, and Uvalde, Texas. Republicans, meanwhile, are facing calls from their base to blunt the gun-access aspects of any legislation, with that pressure on display over the weekend when Cornyn was booed at a state party convention in Texas.

When asked by ABC News on Tuesday if that made negotiations more difficult, Cornyn replied, “Oh no. No it hasn’t.”